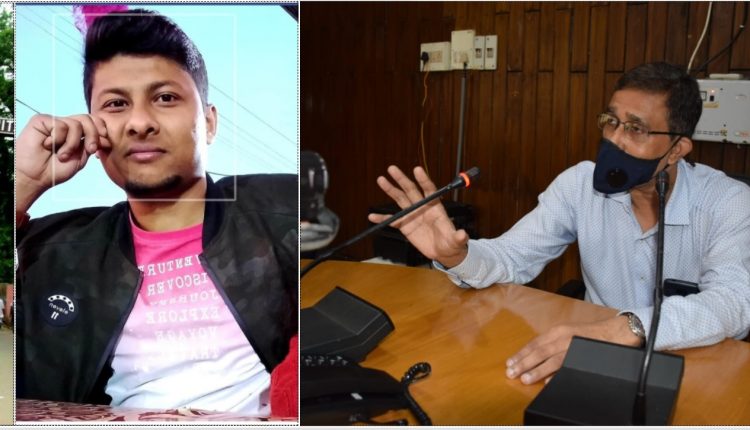 Sayan Das' death: Another 'U' turn by SMCH; "Cause of death is COVID," says Dr. Abhijit Swami

Dr. Abhijit Swami, superintendent of Silchar Medical College and Hospital had held a press conference on August 6, 2020. The decision to address the press came after facing criticism on the way SMCH handled 26-year-old Sayan Das’ death.

The Bilpar resident died on July 31, 2020, and his funeral was done following COVID protocols. The official spokesperson of SMCH said that Sayan Das’ body was sent for postmortem as he was brought dead. However, Sayan Das’ mother and brother both said that he was alive when they went to SMCH.

From August 1, 2020, to August 5, 2020, the SMCH administration did not answer any question related to Sayan Das. Dr. Prosenjit Ghosh, who according to the district administration was the official spokesperson back then, would vehemently ignore the questions related to Das’ death. It is said that he is no longer the spokesperson.

However, Ghosh did reveal on August 4, 2020, that Sayan Das’ postmortem was never performed at SMCH. On August 5, Barak Bulletin published an editorial raising questions related to Das’ death. The only official information that SMCH had shared until then is that Das had tested positive for COVID19.

As we are aware, in Assam there is a Death Audit Board constituted under Dr. Anup Kumar Barman, Director of Medical Education. As per Himanta Biswa Sarma, Health Minister of Assam, this board is the only authorised body in the state which can declare which is a COVID death and which is not.

Between August 1 and 5, Dr. Prosenjit Ghosh shared information about deaths and mentioned which are COVID and which are non-COVID. He did not mention a word about Sayan Das’ death. That’s when Barak Bulletin reached out to the chairman of the death audit board, Dr. Anup Kumar Barman. He revealed, “Sayan Das’ reports were not sent to death audit board by the authority at SMCH.” He also added, “The Principal of SMCH informed me that late Sayan Das was dead before admission and that is why the reports were not sent for audit.”

It is worth recalling here that Narshingpur resident, 85-year-old Shantibala Nath had succumbed on July 10, 2020, at her own residence. On July 12, the official spokesperson of the District Health Department informed that she had tested positive after death and that is why her reports have been sent to the death audit board. The same was communicated for many other deceased, who tested positive after death either in the hospital or at home.

During the press conference on August 6, 2020, Dr. Abhijit Swami was asked why the SMCH stopped sending reports to the death audit board. Dr. Swami replied, “Recently, during a video conference, the Hon’ble Minister of Health, (Himanta Biswa Sarma) asked us not to send reports of brought dead individuals to the board for audit. That is why Sayan Das’ reports were not sent to the audit board. Yes, it is true that earlier we used to send reports of brought dead patients to the death audit board, but now we don’t do it anymore.”

Audio clip of Abhijit Swami’s statement on death audit board, recorded during the press conference on August 6

Sayan Das’ mother states that from August 6, 2020, to August 17, 2020, she kept visiting SMCH to know her son’s cause of death. She wanted an official document from the SMCH and that is why she says, she visited the Superintendent’s office.

“On August 12, I met Dr. Abhijit Swami for the first time at his office. He asked me politely, what do I want. I replied saying my son has died and I want to know his cause of death. He asked me my son’s name and when I said, ‘Sayan Das’, his tonality changed and he told me he doesn’t have time now, and he has to visit the hospital. He left asking me to leave the application that I had carried with me, on a tray kept outside,” told Sayan Das’ mother.

She added, “On August 13, I visited his office again. So many people walked in and out of the superintendent’s cabin but they kept me seated outside. I asked his office, why are they not allowing me to enter as I have come to know the cause of my son’s death. After 30 minutes I requested his office again and they finally allowed me in. Dr. Swami did not answer any of my questions clearly, for a layman like me to understand. He instead asked me to visit the joint director and said that he will be able to give me answers.”

Audio clip of an on-record conversation with Sayan Das’ mother.

It has just been 15 days since she lost her son. All she wants to know is how her 26-year-old boy, who was all well in the afternoon, died at night. She keeps going from pole to pillar to seek her answers. “The same day, I visited the joint director’s office. He clearly told me that the SMCH is making you go-rounds for no reason. The joint director has nothing to do with SMCH. We only look after Civil Hospital. Hassled by this, I asked the joint director to give it to me in writing that he is not the competent authority,” added Sayan Das’ mother.

The next day he did give it in writing while responding to an application, informs Samrat Das, Sayan Das’s brother. “Till August 17, 11:00 PM, we have got no information about my brother’s cause of death,” he added.

In the press conference on August 6, Dr. Abhijit Swami did reveal the cause of death. First Dr. Swami took a ‘U’ turn on postmortem by saying, “Postmortem has risk involved in it.” He added, “To conduct the autopsy, the lung tissue needs to be processed through Histopathology, (The diagnosis and study of diseases of the tissues) and that could put the entire pathology department at risk (since Sayan Das had already tested positive for COVID19).”

Please note that the SMCH spokesperson was quoted saying the body has been sent for autopsy and therefore it is a ‘U’ turn. Moving on, to the cause of death, here is what Dr. Abhijit Swami said on August 6, 2020. “He (Sayan Das) was brought dead at 2:01 AM on July 31, 2020, as per our medical records. We have determined Pneumonia as his cause of death though his samples tested positive for COVID19 and there is no doubt he had coronavirus infection.”

Audio clip of Dr. Abhijit Swami stating Sayan Das’ cause of death is Pneumonia. Recorded during a press conference on August 6, 2020.

On August 6, while ADC Sumit Sattawan and Media Expert District Health Department Suman Choudhury was sitting alongside, Dr. Swami added, “Pneumonia can be of several types – bacterial Pneumonia, viral Pneumonia, atypical pathogen Pneumonia, a chemical reaction can cause Pneumonia if someone consumes toxic pills that would also cause Pneumonia. To identify the cause of Pneumonia an autopsy needs to be done. In the case of Sayan Das, we have determined the cause of death as Pneumonia considering his medical history.”

And now on August 17, the same Dr. Abhijit Swami when asked by our correspondent about Sayan Das’ death, this is what he replies, “What cause of death? The cause of death is COVID. The diagnosis is COVID. If you look at the death certificate, it is written cough and fever. The other day at the press conference also I said the same thing. If there is cough and fever, there could be pneumonia. The guideline is that the required certification of death is done by the treating doctor. The treating doctor wrote ‘COVID positive’ as per the patient’s history, cough and fever.”

Audio clip of Dr. Abhijit Swami declaring Sayan Das’ cause of death as COVID19. Recorded during the press conference on August 17.

Following this statement, Dr. Abhiti Swami questioned the education, integrity, and credibility of the reporter as well as Barak Bulletin the publication. He went on to ask the reporter, “Are you educated enough to be able to understand a line written in the guidelines.” While Dr. Swami said so, MP Dr. Rajdeep Roy was sitting next to him and even tried to stop the superintendent from cursing the media outlet.

There is no doubt that the reporter who went to cover the press briefing is not an expert in medical or forensic science, however, Dr. Swami is an expert and the superintendent. Instead of pondering over his own ability to explain specifics to a layman, he decides to denounce the reportage.

Now that Dr. Swami declared that the cause of death for Sayan Das is COVID, isn’t he also questioning the statement of Himanta Biswa Sarma who said, “Officially a death will be attributed to #Covid-19 only after the (Death Audit) Board has ascertained it.”

When the board has not even received the reports, how is Dr. Abhijit Swami declaring the cause of death to be COVID19?

There is no doubt that Silchar Medical College and Hospital is doing a phenomenal job in managing the pandemic. More than 70,000 tests, thousands of patients discharged and plenty of doctors braving it. But that does not mean the media should ignore the story of a mother, who lost her 26-year-old. And when the media chooses to do that, the credibility and integrity are questioned and the journalist demeaned.

Disclaimer: Since we have been accused of twisting facts and our credibility been questioned, we decided to put out the audio clips for the mass to decide. We stand by all the reports we have published so far. There was no snooping involved, these are audio clippings of official on-record conversation.