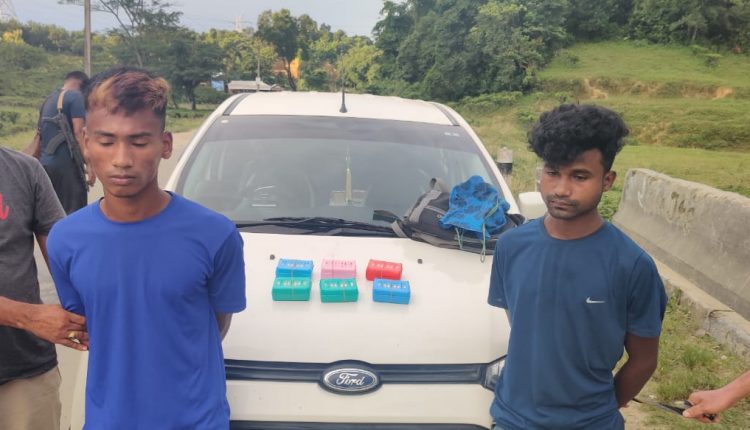 The Assam government’s war against illicit drugs and smuggling is going on incessantly throughout the state. Today, in another successful raid by the Assam Police, 84.8 grams of suspected heroin was seized from two smugglers in Jirighat area of the Cachar district. The operation was led by the SDPO Lakhipur, Kulapradip Bhattacharjee along with Lakhipur police on Monday evening and both the smugglers were apprehended as well apart from the seizure of the illicit drugs.

According to the SDPO Lakhipur, the operation happened at around 4:30 pm on Monday, when Lakhipur police, based on secret intel, apprehended two smugglers in possession of illicit drugs.

“Based on a secret source input, Lakhipur police today under my supervision apprehended two smugglers under the possession of suspected heroin at Lalpani Makhan Nagar area under the Jirighat PS. They were traveling on a motorcycle when the police intercepted them and caught them under the possession of illicit drugs. The weight of the seized heroin is 84.8 grams, which was stashed inside 6 soap cases”, mentioned the SDPO Lakhipur.

The names of the arrested smugglers are – Simon Mura, S/O Moni Mura, and Jonah Namasudra, S/O Doyamoy Namasudra, both of whom are residents of the Kajal Punji area under the Jirighat PS jurisdiction of Cachar district. Apart from the drug seizure, one Suzuki Gixer motorcycle was also detained. As of now, both are kept under the Lakhipur police custody, and further follow-up action has been initiated.