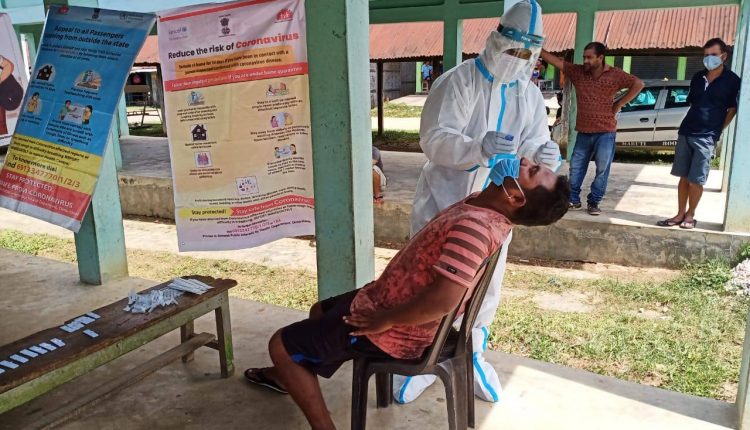 After a long period of time, the number of positive cases in a day crossed 100 in Cachar. The district health department informed that 6096 samples were tested using Rapid Antigen Test kit on Tuesday and out of them 123 have tested positive. 10 samples tested positive on RT-PCR taking the total in Cachar to 133 till 7:00 pm.

The number of tests was high in Karimganj district too. As per the health bulletin released by the Karimganj’s district health department, 3723 samples were tested using the RAT kit. Despite the high number of tests, only 27 were found carrying coronavirus-induced infections. 36 patients were discharged from various hospitals in Karimganj.

In Silchar Medical College and Hospital, 14 patients took admission to the COVID wards while 10 was discharged after they have recovered. Dr. Bhaskar Gupta, vice-principal of Silchar Medical College and Hospital informed that currently there are 112 active patients in the hospital. “16 patients are in ICU and two have been placed under ventilation. 18 patients are considered to be in critical condition whereas eight are under oxygen support,” informed Gupta.

He added that in the last 24 hours, there have been no deaths in the COVID block of Silchar Medical College and Hospital.

45 fresh COVID-19 positive cases have been reported in Hailakandi on Tuesday, taking the district’s total tally to 3,064. Health authorities disclosed that of the 45 positive cases, 42 have been detected under the Rapid Antigen Test (RAT). Altogether 3,518 swab samples were taken on Tuesday.