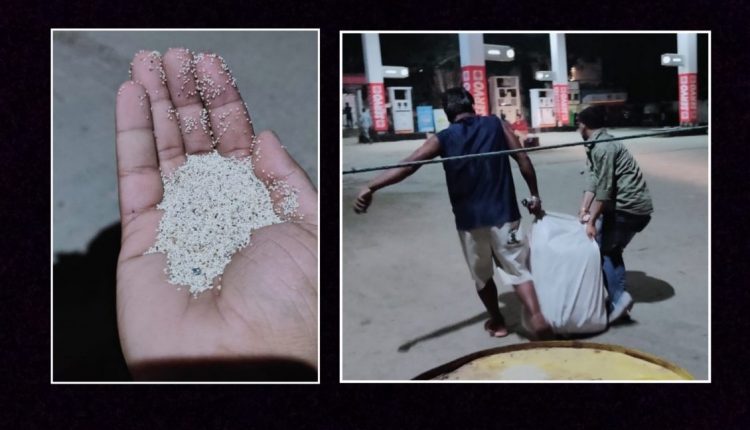 The road was red with blood, the truck was set ablaze, news of numerous deaths were doing rounds in the accident site. That did not stop locals from hitting a new low. In a bizarre accident, a speeding truck ran over an immersion-procession and left many bleeding on the road. As per Silchar Medical College and Hospital’s official record, Pompa Dey (20) and Saloni Das (18) lost their lives and 19 others are now admitted with severe injuries.

The accident occurred last evening near Birbal Bazar in Meherpur, Silchar. Moments after the accident, our correspondent on the spotted an astonishing activity. The speeding truck that ran over the procession was loaded with sacks filled with Poppy Seeds. Locally known as Pusto, it is often used as an ingredient while preparing dishes. The locals were seen filling sacks with poppy seeds and then running away with them.

Eyewitnesses claim that the truck was smuggling Poppy Seeds illegally and that is why the driver tried to run away from the spot. Allegedly, the truck first collided with a man somewhere in Nagatilla and raced to Rangirkhari where he took a U-turn and started speeding towards Silchar Medical College and Hospital. On the way, the truck allegedly collided with a parked car before it ran over a procession in Meherpur. MP Rajdeep Roy confirmed that the driver and two of his helpers have been arrested and Police is investigating the matter.

The images of people stealing poppy seeds went viral on Social Media and netizens too were astonished. While the entire Barak Valley mourns the death of two young girls, someone somewhere would be feasting or selling stolen goods to make profits.