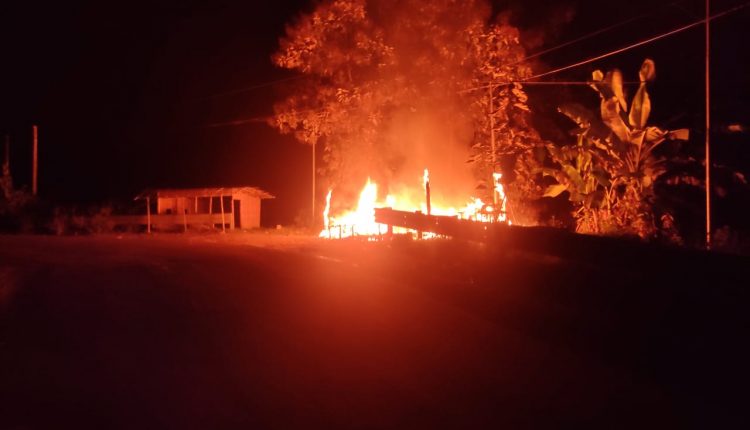 Tension prevails in what is turning out to be one of the biggest border clashes between Assam and Mizoram. In Cachar’s Lailapur area, the Mizo miscreants have trespassed into Assam’s territory. A couple of days back, the miscreants had set houses and shops on fire. The victims have been relocated to a local LP School.

Senior officials of the Assam Government visited the spot and held a meeting with the Mizo counterparts yesterday. The DGP Border Mukesh Agarwal, DC Cachar Keerthi Jalli, DIG Southern Assam, and other senior officials said that the meeting was fruitful and the situation is under control.

However, moments after the meeting, late last night, two shops were set ablaze in the same area. The locals claim that the Mizo miscreants were aggressive once again.

The officer-in-charge of Dholai Police Outpost, Shabuddin, however, feels otherwise. “This time it is the miscreants from Assam trying to escalate the tension,” said the OC. He added, “After our preliminary inquiry we got to know that there was no involvement from the Mizo miscreants in the incident that took place yesterday. There are miscreants in Assam’s side of the border too who are just trying to fuel the fire.”

The lady who claims to have lost her house and shop last night rubbishes what Shahabuddin is saying. She said, “We have seen the Mizo miscreants get down from a tempo and then we ran away from our house. Within a few seconds, they had set it on fire. The officials of Assam Police stood and watched it as spectators. They did not even try to stop the miscreants.”

She has now lodged an FIR at the local Police station claiming the same.

Locals have also claimed that they have seen JCB’s running at night. “They are cutting the hills inside Assam’s territory. There are rumours that armed Mizo Miscreants are trying to set up a camp on the land that they have encroached,” said a local Lailapur resident.