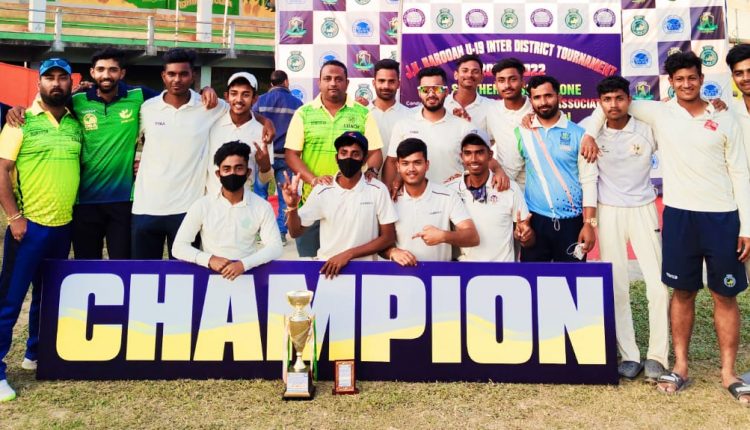 Under 19 Silchar team were up against the Hailakandi to settle the Zonal round of JK Baruah Inter-District championship. Batting first, Silchar got off to a bumpy start. Senior batter of the team, Aman Singh got dismissed in the first over of the match.

But the other opener Parvez Musharaf started rebuilding the innings along with Ram Chandra Das. Parvez was the man of the match of the previous match and Das has been one of the star players in Super Division.

After scoring 24, Parvez returned to the pavilion but Das continued to score 63 runs in a very difficult pitch for batting. Samir Sinha (46) and Prashant Kumar (32) took the team’s total to a respectable 201 runs.

A lot of Hailakandi’s chances depended on star batter Rajjit Paul Choudhury but he was sent to the pavilion in the first over of the match by Sahil Hussain. While Silchar managed to build partnerships after Aman Singh’s early dismissal, Haialkandi failed to do so. 0, 0, 0, 0, 0, 0 six batters failed to open the account.

On one side when Parikshit was turning and bouncing to pick wickets, he was well supported by Parvez Musharaf from the other side. Parvez picked up three wickets and together they bundled Hailkandi out for only 52 runs.

Parikshit Banik was adjudged the man of the match for his outstanding bowling display.

With this victory, Silchar becomes the Zonal champions of JK Baruah Under 19 inter-district championship. Coach Tathagata Deb Roy was ecstatic, “It was a very difficult wicket especially for the batters. The bowl was keeping low, the bounce was uneven, considering all these odds, the way our boys played is commendable,” said coach Tathagata Deb Roy. He was supported by his coaching partner Deepankar Deb.