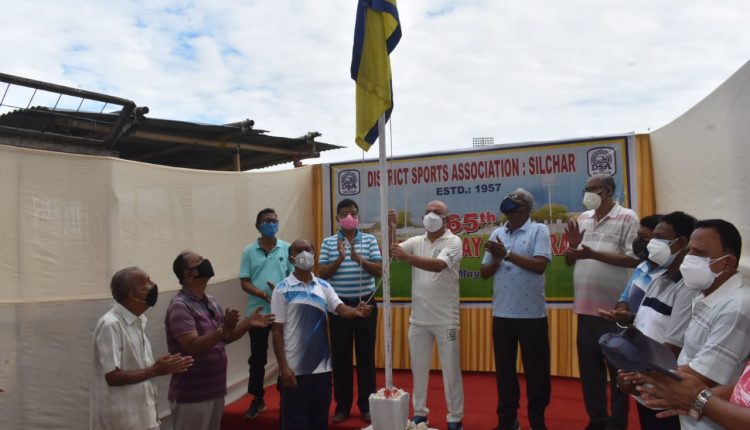 The Silchar District Sports Association (DSA) had started its journey on this date today in 1957. About 60 sportspersons from the city came forward that day and formed the Silchar District Sports Association. The association has had to overcome several obstacles after starting the journey of the Silchar DSA. Over the years, there have been many storms. However, Silchar DSA did manage to get the badge of one of the best DSA’s in the entire state. There are many contributions behind this feat. But on this day, those founding members are most remembered. If they had not come forward at that time, the Silchar DSA might not have reached this level today. Hence, on their 75th foundation day, Babul Hore, the current President and Bijendra Prasad Singh, the Secretary of the working committee, remembered all the founding members of the association. He wished long life to those who are still with us today.

Due to the Corona situation last year, the Silchar District Sports Association celebrated its foundation day in a very domestic manner last year. This year too, the Silchar DSA has celebrated its foundation day with an informal ceremony due to the Corona pandemic. This morning, the Silchar DSA celebrated its 75th foundation day with a flag-hoisting ceremony and cleaning campaign. In the Corona situation, President Babul Hod raised the flag of the company at 7 am on Wednesday in compliance with the Kovid protocol. Earlier, President and Secretary Bijendra Prasad Singh gave a short speech. The stadium was later cleaned by a joint venture of Silchar Veteran Cricketers Club and Barak Valley Sports Journalists Association. Food items, masks and sanitizers were then distributed among the cleaning staff.

On this day, food items were handed over to 35 cleaning workers of the municipality. The field workers of the association were also present. Due to the Corona situation, the founding members could not attend today’s event. As of now, among the founding members, only Badal Dey, Abhijit Endaw, Sujit Dutta Gupta, Dr. Purnendu Das and Niranjan Roy are stilk with us. The rest have left this world.

President Babul Hore said, “Today is a special day for every member of the association. This is the day the association started its journey. Unfortunately, after last year, we could not celebrate the day properly. But what else couod have been done. There was no other alternative keeping the situation in mind. Hopefully we will be able to overcome this difficult time soon.