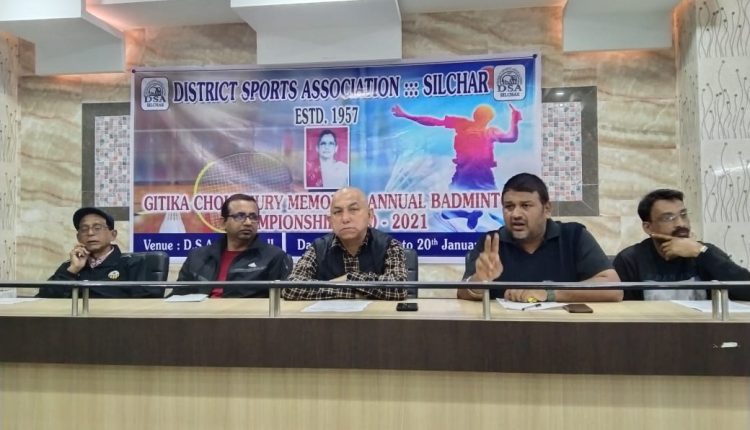 Silchar DSA's annual badminton tournament from January 17; there will be seven categories

From January 17, 2021, Silchar DSA will organise its annual badminton tournament. The games will continue till January 20 and all the matches will be played in Silchar DSA’s indoor courts. The top management of the sports association has announced the same in a press conference earlier today.

President of the association, Babul Hore thanked the sponsor for supporting the tournament. General Secretary of Silchar DSA, Bijendra Prasad Singh added that last year the sports association could not organise the tournament because of the outbreak of Coronavirus induced pandemic.

“This year we were certain that we will do it,” said Singh. He added, “The regular sponsor of the tournament opted out due to some personal reason but we are grateful to Ramendu Shekar Choudhury for stepping up in these tough times and sponsoring the tournament.” ‘

Indoor secretary, S Roy informed that tournament will have eight different categories. The last date to enroll names and participate in the tournament is Januarty 15. “After the registration period is over, we will release the fixture,” informed Roy. The indoor secretary added that Prabir Das will be in charge of the organising the tournament.

Treasurer Animesh Sengupta informed that the sponsor has paid Rs 15,000. “We haven’t made an estimate yet but it will take around Rs 20,000 to organise a tournament of this stature.”

Sponsor Ramendu Shekar Choudhury recalled her mother’s love and affection towards sports. “She used to visit the stadium every now and then and that is why I decided to sponsor the tournament in her memories.”