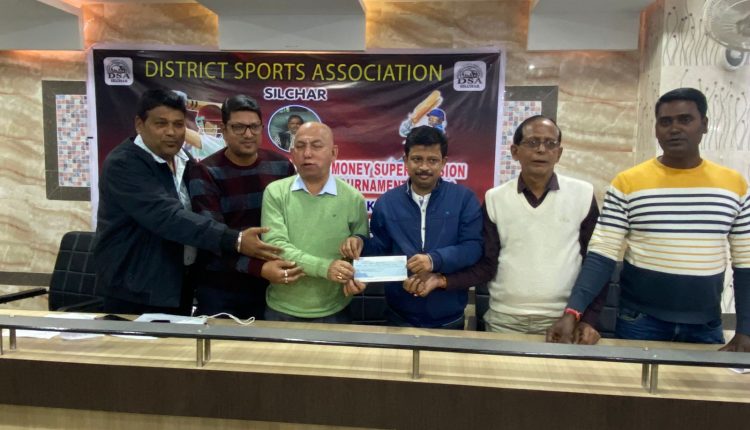 Super Division is the top division club cricket competition organised by the Silchar District Sports Association. Six teams will participate in the round-robin format league round and four top teams will qualify for the semi-finals. Last year, star cricketer of this valley, Samik Das’ Town Club was defeated in the Final by veteran Mosarob Hussain’s United Club. The match played under the floodlights in Satindra Mohan Dev Memorial Stadium attracted a significant crowd.

“This year too, if everything goes according to plans, the final will be played on January 14, 2022, under lights,” informed General Secretary of the Silchar DSA. At a press briefing held at the conference hall of SM Dev Stadium, the President of the Silchar DSA, Babul Hore announced the dates of the upcoming Super Division tournament. He thanked Ankur Paul, son of late Narayan Paul for extending his support and investing again to remain the title sponsor.

“Late Narayan Paul is a big name in the socio-cultural and spiritual fraternity of Barak Valley. While he remain devoted to the Ramakrishna Mission, he also invested in establishing properties that stand tall today at the heart of the town. Be it Amrit Sweets, Kalpataru Hotel, late Narayan Paul has left his legacy. We are happy to have our Super Division Cricket tournament called, Narayan Paul Memorial Super Division tournament,” said Babul Hore.

Tribeni Club won the First Division tournament last winter and by doing so, they have secured a berth in the Super Division championship. As they will make their debut this year, the DSA will provide them Rs 6000 to get coloured jerseys for their players.

Animesh Sen Gupta, treasurer of Silchar DSA briefed the press about the budget of the tournament. He disclosed, Ankur Paul handed over a cheque of Rs 1.5 lakh to be the title sponsor of the tournament. Moreover, he said the organisers will have to spend around Rs 2.5 lakh lump sum after accounting for all miscellaneous expenses.

Niranjan Das, Cricket Secretary of Silchar DSA explained the format of the tournament. “We will have 40-over matches and the rules for One Day International will be applicable,” informed Das. He reiterated, the finals will be played under floodlights on January 14. “Four new white balls will be used in each match and all the balls will be provided by Silchar DSA,” he added.

While Super Division is a premier cricket tournament, the rules followed are dated at best and obsolete at worst. If the match, even at the knock-out stages ends as a tie, the winner will be decided after spinning the coin. “This is what the law is at this stage,” says Das. Secretary Bijendra Prasad Singh was quick to add, “We are in the process of proposing an amendment to the laws followed.” It is worth mentioning here that International Cricket Council decides result of a tied match by playing a super over, something that the Silchar DSA won’t do.

Also, Super Division turns out to be a bastion for the clubs with deep pockets. There is no cap as to how many players belonging to other districts can play in one team. It was brought to the notice of the organisers that one of the matches played last year had at least seven players from Guwahati and other districts of Bramhaputra Valley taking opportunities away from the local cricketers. Secretary Bijendra Prasad Singh said, such legitimate questions will be tabled during the upcoming meetings and the association is planning to bring in amendments to the existing laws in order to make it a level playing field for all clubs.

Himadri Das, umpire secretary of Silchar DSA informed that the umpires officiating in Super Division will be rated by the captains in each match. “Any umpire who has officiated three or more matches will be eligible for the Best umpire award. This is our attempt to reward the umpires who do what we call a very thankless job. A committee of three will screen the ratings and the highest scoring one will get the memento and cash prize during the prize distribution ceremony,” informed Himadri Das.

He added, “Along with the best umpire, we will also have a fair play award. Both umpires will rate the teams on the basis of their on-field behaviour and the highest-scoring team will get the fair play award.” India Club was awarded the Fair Play Award last year and Gopikanth Singha got the best umpire title.

Players of all teams are often spotted at the SM Dev Stadium prepping for the Super Division Tournament. “We urge the people of Silchar to attend the matches and support local talent,” Bijendra Prasad Singh said as his concluding remarks.