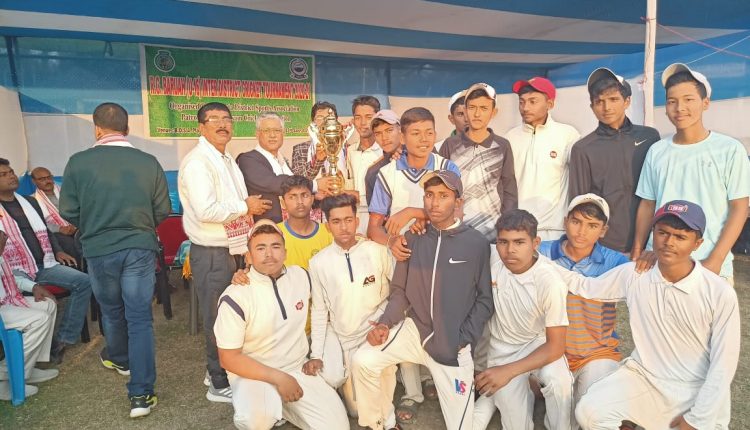 Anti-climax for the cricket lovers of the region. Under 16, Silchar team which played like champions all throughout in RG Baruah inter-district tournament has fallen short in the finals. Played in Barpeta DSA’s stadium in Barpeta, Silchar U-16 was pitted against NF Railways U-16 team in the finals.

The game started yesterday and as per Silchar’s Coach Bishal Tewari, the conditions favoured bowlers in the early hours. Despite that, the Silchar openers got off to a steady start. Shiba Sinha scored 35 and more importantly played 95 balls, taking away the morning benefits.

Abhishek Kumar (28) batting at number three played 80 balls and their partnership took Silchar to a good position. Captain Abhishek Deb scored 50 and the match was turning towards Silchar. It looked Deb and Co. will post a big first-innings score for NF Railways to chase. In two-day format, first-innings lead plays a vital role. Whenever the match ends as a draw, the team with fist innings lead is declared victorious.

The turning point of the game, according to coach Bishal Tewari was the three back to back wickets Silchar lost yesterday in the middle of the innings. Former captain Prashant Kumar, Biki Roy and Anurag Sinha got dismissed without scoring a single run. That broke the backbone of Silchar’s innings and the team bundled out for 183.

Silchar needed early wickets to remain in the game and secure a first-innings lead. Coach Tewari said Rahul Singh and Ahad Barbhuiya will play a critical role. Ahad gave Silchar the much needed early breakthrough by sending opener Siddharth Mitra to the pavilion for 1.

Biki Roy got better of the other opener Rajveer Singh (32) and picked the crucial wicket of Tarun Rao (5). Silchar looked like favourites again as NF Railways teams was languishing at 48 for four. After Ronit Akthar (37) was dismissed, Sumit Kashyap (53) and Kankan Kashyap (44) stitched a match-winning partnership.

Silchar team dropped catches and missed a crucial stumping, which according to the coach took the match away from the defending champions. NF Railways ended their innings at 231 for 10 after 85.4 overs.

Based on the first-innings lead, NF Railways has been declared as the champions of RG Baruah inter-district trophy.