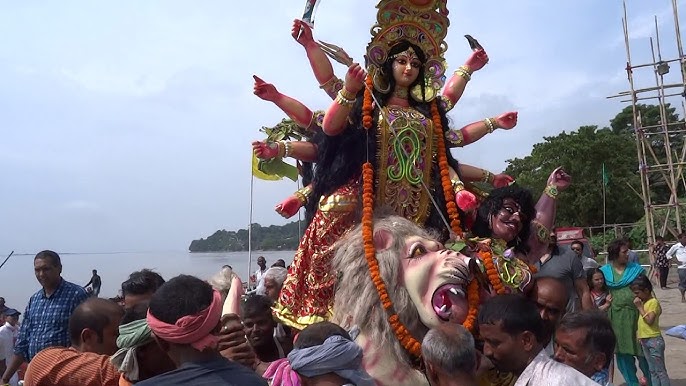 Silchar Municipality gears up for Durga Puja; to evaluate feasibility of using multiple ghats for bisarjan

Just 10 days left for Durga Puja and Silchar Municipality Board is gearing up to ensure safe and seamless Sharod Utsav. Yesterday, the executive officer Sumit Sattavan called for a meeting where people across spheres shared their views. Immersion at Bisharjan Ghat was one of the issues discussed during the meeting.

The attendees in unison submitted before the executive officer that the Municipality must allow immersion in more ghats to avoid mass congregation. Speaking with Barak Bulletin, Sattavan said they will look into the matter. “It is not the ghats only, we also need to have the availability of NDRF and look into the logistical challenges. We have received the suggestion and evaluate the feasibility of using multiple ghats during immersion.”

Madhura Ghat, Annapurna Ghat among few others have been suggested by the attendees. Apart from that, the attendees have urged the executive officer to initiate a new award to recognise the Puja committee for conducting puja by following COVID protocols.

The attendees also pointed out that the bulbs in several lampposts are not functioning. “We need to be informed about it and only then the municipality can act. Now there is no board, so, we do not get enough feedback. We will look into it and try to resolve before Puja,” said Sattavan.

He also added that the Municipality will write to the Police and ask them to enhance vigilance. “We have been asked to keep an eye for gambling, substance abuse, and other anti-social activities during the Durga Puja,” informed Sattavan.

Just 10 days left for Sharod Utsav to begin, but the people of Cachar are still waiting for the Standard Operating Procedure that needs to be followed during Durga Puja. There is no clarity on the size of the idols or if the construction of temporary pandals will be allowed. Sattavan said the administration is waiting for the SOP from Health Department of Assam.