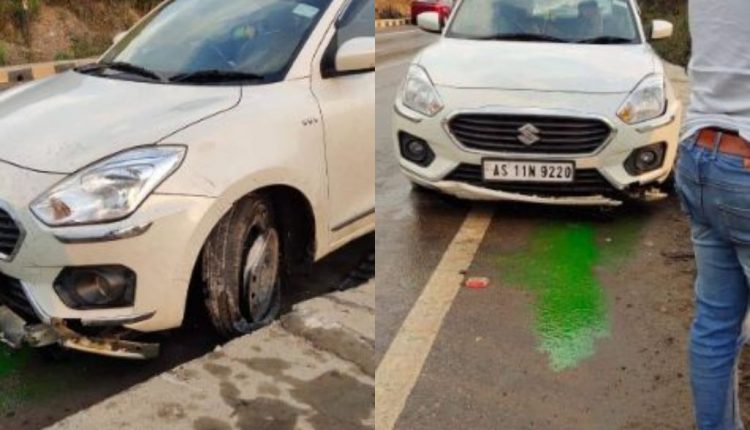 By barakbulletin On April 22, 2019 - 4:26 pm
Share
The Shillong road is no less than an adventure for the drivers especially for those who do not drive through the ghats regularly. Since last December another obstacle in the road that connects Silchar to the state capital and rest of the country is the man made accident-trap. Miscreants intentionally spread lubricants like mobil (engine oil), diesel etc. to trap vehicles. Yesterday, four Silchar residents got trapped and met with an accident on their way back to Silchar from Guwahati.

Somewhere between, Jowai and Ladrymbai the National Health Mission employee who was travelling back to his home with family met with an accident. Their Maruti Suzuki Swift Dezire car lost control after skidding on lubricant oil and collided with the fencing. Just couple of minutes within the accident, three local citizens reached the spot and asked if they need recovery van to take the car to a garage. The NHM employee refused to hire their recovery van which irritated the locals and they started behaving in an inappropriate manner.
“The moment they got off the car they could see oil being spilled all over. Thank God the driver was experienced and he could control the vehicle otherwise this could have easily taken a fatal shape,” says a colleague of the victim.
The NHM employee was adamant that he would not take help from the local miscreants and thus called for a recovery van by himself and toed the vehicle to Silchar.
The victim expressed his sorrow at the incident and said he considers himself and his family lucky to survive the accident. He firmly believes that the Assam government should intervene immediately and nab the kingpin running this racket.
Guwahati resident Abdul Hannan also met with a similar accident and appealed to the Sarbananda Sonowal government to take some actions as this road connects the two parts of Assam. “Setting a death trap for money is an abysmal act and the administrations should take necessary actions immediately,” said Hannan through a video uploaded on social media.
Accident TrapBarak NewsMarutiNational Health MissionOils SpreadShillong NewsSilchar News
Share FacebookTwitterWhatsAppEmailLinkedin
You might also like More from author
News