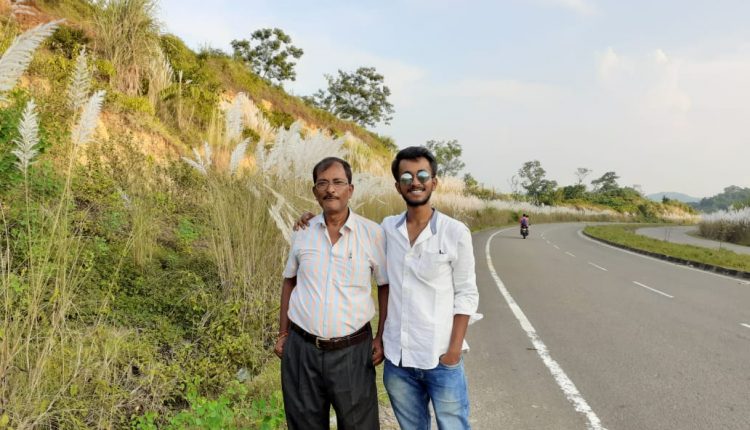 In the age of digital transactions, at the expense of a customer’s convenience, fraudulent cases related to bank transactions are at an all-time high. Especially since the Corona pandemic, where cashless transactions became the need of the hour to avoid any human contact, many people have fallen prey to fraudulent transactions after getting manipulated by the culprits, either through fake SMS or through calls. In Silchar recently, another such incident took place a couple of weeks back where a person got manipulated by an unknown fraud into sharing his debit card details with him which resulted in ₹17,000 getting deducted from his bank account. But due to immediate action and reporting to the police authority as well as the concerned bank officials, as of now, the victim has already got more than half of his stolen money back and is in the process of recovering the rest of the money as well.

Sukhamoy Dutta, aged 61, is a resident of the Madhyashree Lane of Chengcoorie road in Silchar. He’s a businessman who deals with heavy weighing scales and machines of different sorts. On June 30, in the evening, he got a call from an unknown number claiming that he’s an Army personnel who’s interested in buying a weighing machine from him. Sukhamoy Dutta didn’t suspect much as he’s used to selling such weighing machines to all kinds of people. But somehow, the culprit succeeded in manipulating him into sharing his card details immediately after which money got deducted from his account. Sukhamoy Dutta and his son immediately realised that they were being scammed and hence, they wasted no time to block their account and file an FIR about this in the local police station. They also contacted their bank authorities informing them about the same, all of which they did within 24 hours of that incident happening.

Sukhamoy Dutta’s son, Sourav Dutta, is the one who intervened at the right moment to stop any further transaction from the bank account. Sourav said, “On the evening of June 30, an unknown person called up my father introducing him as an army employee named Vikram Waghmare who’s interested in buying one of my father’s weighing equipment. My father didn’t suspect him much as during the conversation, the culprit sent his photo and ID to my father on WhatsApp to gain his trust. At that time, I was sleeping so wasn’t aware of all this. At first, the person said that he’d come to pick up his weighing machine for which he’d pay in advance through card payment. The concerned weighing machine is of 300 kg capacity and costs ₹17,000. That culprit somehow manipulated my father into sharing his card details telling him that he’s going to pay the price of that particular weighing machine. So after getting all the card details, he immediately tried to transact ₹17,000 from my father’s Axis bank account, of which a confirmation SMS also arrived in my father’s phone. But seeing no account balance update in that SMS, my father got curious and asked him why wasn’t it showing in that SMS. The culprit then told him to share that OTP mentioned in that SMS, after which he claimed that my father would be able to check his account balance. Obviously, after sharing that OTP, ₹17,000 was immediately deducted from my father’s account rather than receiving that amount. The culprit then also tried to transact more money, as we were getting constant OTP messages in my dad’s phone, but couldn’t do so as there was limited money in that account.”

Sourav Dutta then said that it was then only that he had woken up from his sleep and overheard his father speaking about all this to someone over the phone. “After waking up when I got to overhear my dad speaking about all this, I rushed to him suspecting he was about to get scammed. But it was already late as ₹17,000 got already deducted and the culprit was trying to steal away even more. I intervened and took over the phone myself and tried to lure him into physically meeting us. But he kept on avoiding that and after a while disconnected the call. Being finally aware of the fraudulent plot that my dad got preyed to, I wasted no time to immediately file an FIR in the local police station and also reported this to the cyber cell of the SP, Cachar.”

“In the meantime, in the SMS where it was mentioned that ₹17,000 got deducted, I could ascertain that the transaction took place with the help of a third-party payment app called MobiKwik as it was mentioned in the transaction details of the SMS. So I contacted the customer care of the MobiKwik app and explained everything in detail including handing over the FIR copy to them. The Axis bank account through which the incident took place was already blocked by us. The MobiKwik authorities were cooperative enough to help us throughout the process and even told us all the relevant details of the transaction through which the culprit transacted the money with the help of the MobiKwik app, including the culprit’s phone number and address. They also informed us that from the concerned MobiKwik account, the culprit had transferred ₹10,000 from the total ₹17,000 amount to another ICICI bank account, and the rest ₹7,000 was still kept intact in the culprit’s MobiKwik wallet. So we then contacted the ICICI bank officials to look into this matter and in the meantime, MobiKwik authorities had also blocked the culprit’s wallet by then, so that he couldn’t use that wallet anymore. They had also refunded the ₹7000 amount back to my dad’s Axis bank account and the rest ₹10,000, which is in the ICICI bank to which the culprit had transferred earlier, is already in the process of getting refunded, after the dispute gets officially settled, according to the ICICI bank authority”, said Sourav, who is a Software Engineer, R&D by profession based out of Bangalore, and currently working from his home in Silchar.

But out of this entire scam story, the gist of the matter is that if proper action is taken in due time, anybody who’s a victim of bank fraudulence will be able to get back their money sooner or later, as was seen in this case. From filing FIR to reporting this incident to the cyber cell of the SP Office, to raising the issue to all the three parties involved in this illegal transaction, all being done within 24 hours of that incident transpiring. And due to this, the victim, Sukhamoy Dutta, and his son Sourav Dutta were able to retrieve more than half of their lost money. Whereas most people stop after blocking the bank account or filing an FIR, it is also important to raise the issue with the concerned bank authorities by sharing every minute detail with them. “Most importantly, people should understand that to receive money, the sender doesn’t need any card details at all, just the bank account number and the IFSC code is enough to send anybody any amount of money. So if anybody asks about card details to send money, do remember that most probably that person is trying to scam you. And even if you do end up getting scammed somehow, don’t panic as you have 24 hours to report this incident to the police authorities and also the bank authority with all the relevant details. These steps go a long way to retrieve your lost money if taken in due time”, asserted Sourav Dutta.

When Barak Bulletin got in touch with the Additional SP of Cachar, Partha Pratim Saikia, he said that the responsibility of sharing one’s personal bank details lies with the account holder only. He said, “People should understand that information like card details and OTP are one’s personal data and shouldn’t be given away to anyone under any circumstances. And if still anybody gets duped into sharing those details, one should immediately contact the police within 24 hours, beyond that period, not even the police can help. We at Cachar Police were planning to organize some awareness programmes in collaboration with some NGOs but due to the pandemic, the plans got delayed. The awareness has to be created regarding issues like card transactions, fake luring SMS, careful use of digital transaction platforms like MobiKwik, PayTm, etc. so that they don’t end up sharing personal bank details to wrong people.”