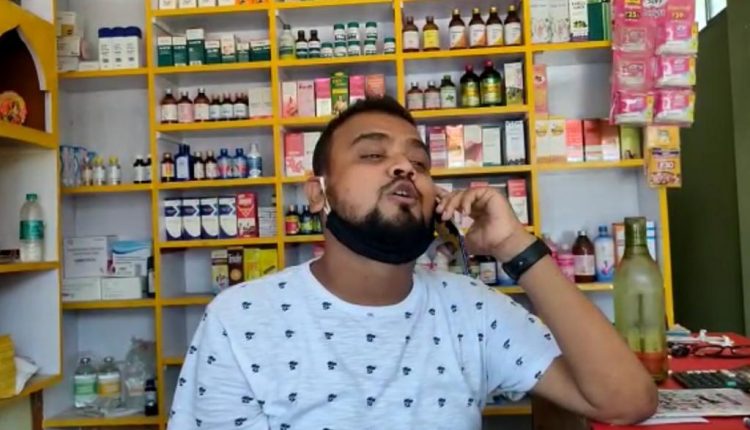 Singing to Covid patients, how Bikramjit Baulia became friend to those in isolation

You have got a bunch of things to talk about and no one to talk to. That is how life is in isolation. Many researchers have identified Covid as the single largest reason forcing people to depression. Though it is a respiratory illness that has caused a global pandemic it is doing a sizeable damage to mental health too. Considering the vulnerability, Silchar based singer, Bikramjit Kar popularly known has Bikramjit ‘Baulia’ has started what he calls “Music Therapy”.

The popular singer of Barak Valley who has done hundreds of shows published his number on social media with a message for all the Covid infected patients in isolation. His post was mocked by a few as “publicity stunt” but Bikramjit Baulia remained indifferent to it and continued with the initiative. “First day, I did not get calls,” he says.

Five days after he rolled out the initiative, he has sang to more than 230 patients in isolation. “When I launched my first album in 2013, I was excited. I was younger and it was like I am in cloud 9. I have been performing on stage since 2005, today, I can say that this 230 odd calls that I have got, is my biggest achievement ever,” says singer Bikramjit Baulia.

In 2013, his album ‘Baulia’ became super hit and that is when he changed is public name to Bikramjit Baulia from Bikramjit Kar. “I saw, Lopa Di’s (singer Lopamudra Mitra) post on Facebook where it was mentioned that they will sing to patients in isolation. Immediately I thought why can’t I do something similar and that is what inspired me to start this initiative of singing to patients,” Bikramjit Baulia informs.

He has received calls from Silchar, Pune and other parts of Maharashtra, Kolkata. He says there are families where three to four people are infected and he sang to all of them. It was like a massive distraction for them. There are pyres burning round the clock in Silchar. ICU is filling fast. More than 400 people are testing positive for Covid19 everyday and the demand for oxygen is growing leaps and bounds. The second wave has hit Barak Valley like a Tsunami. Cachar is reporting second highest number of cases on a daily basis among all districts in Assam. The situation is grim and there is very little distraction available. Baulia singing on calls have become the one little window for the Covid patients.

He has urged his peers to also join in this initiative and start contributing in this fight against Covid 19. “There is still a lot of stigma in society. It is high time we stand united in our fight against the virus. In Kolkata or Mumbai or Delhi, social media sos posts are saving lives by arranging cylinders or oxygen beds. Many are helping in transferring patients to the hospitals. We also must unite and pitch in with whatever we can. Not all need to sing, some can tell stories, some can provide food. We have to simply think that one of our own is infected and we must take care,” he opines.

Bikramjit Baulia informs that Santosree Shome, who is a popular news reader of All India Radio has volunteered to be a part of this initiative.

Not many would know how Ameen Sayani looks but the legendary radio announcer’s “Behno aur Bhaiyo” in unique style is something that still reverberate in people’s minds. His show ‘Binaca Geetmala’ is still considered as one of the most popular radio programmes in Indian subcontinent. Another legendary radio announcer, Birendra Krishna Bhadra, who’s Mahishasuramarddini first aired in 1931 is still relevant especially on the occasion of Mahalaya. Though radio has lost its popularity and the business shrunk manifold, the power of voice remains.

Five years from now, in all probability, the pandemic will subside. Ten years from now, the haunting memories of isolation will fade to oblivion. But the 300 people Bikramjit Baulia sang to, and the hundreds that he will sing to, will always remember him or at least, his voice. “When they think about 2021, if I am remembered even once for this initiative, or they are able to recall that someone sang to them while they were in isolation, it would be like a lifetime achievement for me,” concludes Bikramjit Baulia.