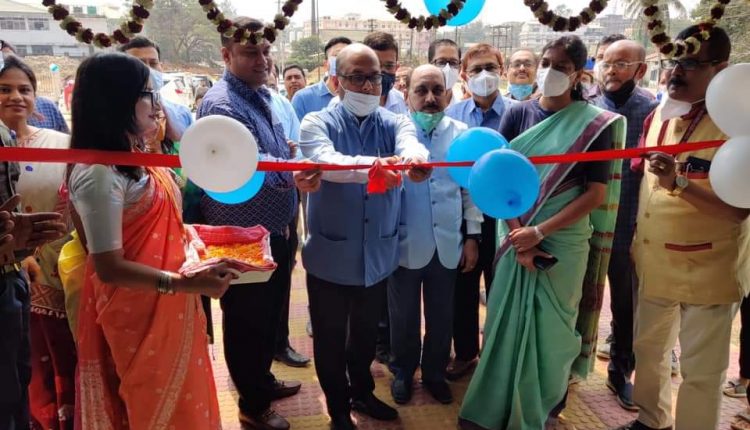 Silchar Medical College & Hospital (SMCH) is now blessed with the most modern and largest mortuary in entire North-east India. It was officially inaugurated on Friday morning in the presence of MP Dr. Rajdeep Roy, Deputy Speaker Aminul Haque Laskar, Deputy Commissioner Kirti Jalli, MLA Mihir Kanti Shome, Additional Superintendent of Police Jagadish Das and others. On that day, the guests inaugurated the new morgue following which a small ceremony was held. Taking part in it, MP Rajdeep Roy said that he has already talked to the Union Health Minister Harsh Vardhan to upgrade Silchar Medical College & Hospital (SMCH) into a Super Speciality one. The Health Minister has apparently agreed to his word and said that work will start in future based on the DPR given by the Principal of Silchar Medical College & Hospital.

Speaking on the occasion, Dr. Babul Bezbaruah, Principal of the SMC hospital, said about the new morgue, “The mortuary has been constructed at a cost of Rupees 2 crores and 86 lakhs. It has a lot of space as well. There are special waiting and resting arrangements for the family of the deceased. Besides, those who are studying in the medical college hospital, often have to do deal with these things like a corpse, in which case this new morgue will be much more beneficial. By building the largest mortuary of the North-East in the SMC Hospital, the state government has conveyed to us that they do give us equal importance. A lot of new work is going on in the hospital premises right now and I hope that the necessary departments will be opened in the future as well.”

The chief guest at the event was MP Dr. Rajdeep Roy who himself is a former student of the hospital and is currently practising as a doctor in the same hospital. He paid tribute to his teachers at the beginning of his speech and said, “It is somewhat surprising to be invited as the chief guest at my own hospital where I once studied. Principal Dr. Babul Bezbaruah has already sent DPR to upgrade this hospital into a super speciality one. The work got delayed due to the Corona situation last year, but I have recently spoken to the Union Health Minister about it. The money that will be spent for the up-gradation of Silchar Medical College Hospital, be it from the Union or the State, comes from the taxes paid by the people. Our government prefers to spend a lot of taxpayer’s money on public service. So after talking to the health minister, I am hopeful that the departments that are not yet available in SMCH won’t take long to build. Of course, the Covid vaccination process has kept the entire country busy these days. But still, health minister Harsh Vardhan has taken the time to listen to our concern amidst such a busy schedule, so hopefully, he’ll agree to our demands in the future as well.”

Dr. Abhijit Swamy, Superintendent of the hospital, said that more than 300 autopsies are conducted at the SMC hospital every year. However, this number has increased a lot in the last year, of course, due to the high death rate from the Coronavirus. The construction of this new mortuary will benefit society in many ways. ”

Vice-President Aminul Haque Laskar said, “Health Minister Himanta Biswa Sarma immediately made infrastructural improvements at the Silchar Medical College & Hospital to deal with the Corona situation. This time, the largest mortuary in the entire North-East has been built in this hospital. A multi-storey building with 500 beds will be constructed in the future. There will be more such big plans in the future and one day Silchar Medical College Hospital will come up as one of the most developed and largest hospitals in the North-East. ”