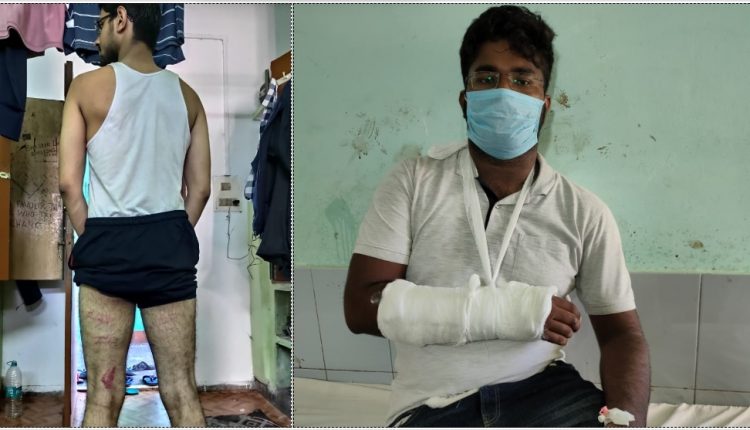 At around 12:30 noon, today, two final year MBBS students of Silchar Medical College and Hospital got brutally beaten by a CISF official manning a barricaded road. The sub-road to the boys’ hostel has been sealed and barricaded and the students requested the officials to let them through which the officials did not like and they manhandled both of them is what the soon-to-be doctors alleged.

Speaking with Barak Bulletin, Abdul Sattar who was one of the two to be assaulted said that they had gone for an essential meeting to iron out mess related issues in the college. “When I requested the official to let us go he started abusing us and then he asked us to call the in-charge of Ghungoor Police outpost and said he would only allow us to go if the in-charge says so,” said Sattar who is also the president of SMCH Students’ Union.

He added that by the time he could dial the in charge the official started beating both of them mercilessly, “We kept showing our cards and saying that we are students, but the official kept abusing us and said just because you have a card you feel you are a hero and then continued beating us,” added Abdul Sattar.

The students went to the Principal who then summoned the CISF official to gather knowledge about the incident. Sattar says the CISF official was asked to apologise which he did not and rather misbehaved with the SMCH authority.

Superintendent of Police, Cachar Manabendra Dev Ray commenting on the issue said that “This path through which two boys were traveling is sealed and they had no business using that path to travel to the boy’s hostel.”

The SP added, “Both of the students were spotted using this path on several occasions and despite asking them not to, they continue to do so. Today the CISF officials manning the barricade stopped them and asked them to use the main road and not this sealed alternative one. They did not agree and started arguing with official following which the official changed on them.”

The Principal of Silchar Medical College and Hospital, Babul Bezbaruah condemned the incident and said, “Whatever the reason might be, the CISF official cannot take law in his hand and beat the students in the manner that he has.”

He added, “If the students did something wrong the CISF official could have complained to me and I would have taken necessary actions. He reports to an OC and before beating students he should have consulted the OC.”

Bezbaruah said he has informed the SP about the incident who he says has assured that the CISF official will be replaced. However, Bezbaruah too confirmed that the road has been sealed and traveling on that path is not allowed. “About three months back, because the thieves were stealing stuff I spoke with the MP of Silchar and we got the road blocked,” said Bezbaruah.

Meanwhile, the photos of wounded students went viral on social media and several other students’ unions have also condemned it.

“According to me, Police cannot just lathi charge or thrash citizens in the name of law and order. The students had their Identity Cards and are called up as a backup for COVID-19 by the government. They left their homes to serve society during the pandemic and this is not how the police should treat them. Strict action should be taken against the CISF personnel on duty. The immediate suspension is needed,” said Dawipayan Deb former General Secretary of the SMCSU.

Aritra Babai Dhar, GS Assam University Students’ Union too condemned the incident. He posted on Facebook, “UG final year doctors were called into the station by the higher authority as backup. Two of those UG Doctors of Silchar Medical College were trying to reach their hostel through a by-lane blocked by police inside the campus. They got brutality thrashed in broad daylight.”

Dhar added, “This is an unacceptable incident. I on behalf of Assam University Students’ Union strongly oppose this incident and extend our supportive hand towards the SMCH Students’ Union and giving assurance that we will always stand by their side. It is a black day for all of us.”