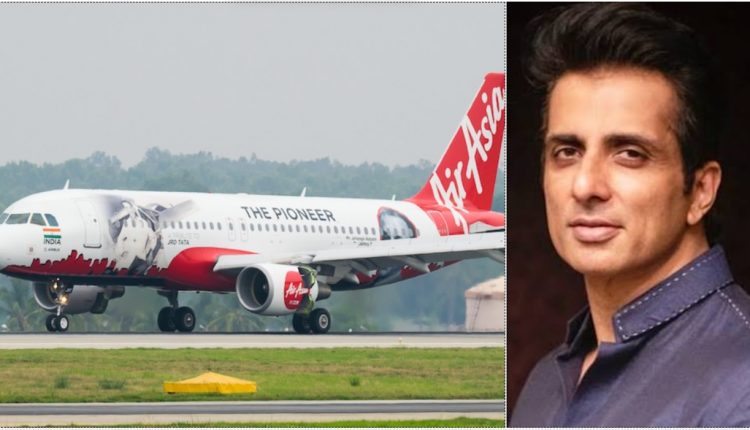 We all have heard about Bollywood actor Sonu Sood’s noble work, amidst this Corona pandemic. He has been a life savior for many stranded labourers. The actor has been arranging communications for the people stranded in various parts of the country. He spots requests on twitter and then makes arrangements to send them back to their native place and unite them with their family.

This time, Sood has offered his help to the residents of Barak Valley who are stranded in various parts of Mumbai. According to sources in Silchar Airport, an Air Asia flight carrying around 170 Barak Valley residents will be flying from Chhatrapati Shivaji Maharaj International Airport, Mumbai to Silchar Kumbhirgram airport tomorrow. This flight has been arranged by the actor who played an award-winning role in Dabangg and has won Filmfare for his role in Telugu movie Arundhuti.

The filmstar has confirmed it to Barak Bulletin. Speaking with the correspondent, Sood said many migrants approached him for assistance and he thought it is his responsibility to help them in this tough time. “Many migrants who have got stuck here in Mumbai called me asking for help. I think it’s my responsibility to take care of them and it’s good that they are going back home tomorrow.” On asking whether he will be personally there to see off the flight tomorrow, the actor replied “yes” and said he will share more details after the flight takes off tomorrow.

It is worth mentioning here that Air Asia does not have a team in Silchar Airport and therefore staff of some other aircraft will have to handle the incoming aircraft. “It’s not in my knowledge with whom they have contacted but they must have hired some ground handler to assist after landing,” said Silchar Airport director, PK Gorai,

However, Airport sources confirmed that the Air India team will assist the Air Asia flight in Kumbhirhgram airport.

Flight no. I5 9165, has been scheduled to arrive at Silchar on 12:10 hrs and will fly back at 13:00 hrs. Silchar Airport authority has promised to extend all necessary support for this noble cause.

Tragic incident in Tarapur area : Dead bodies of aged mother and her son found in the same room