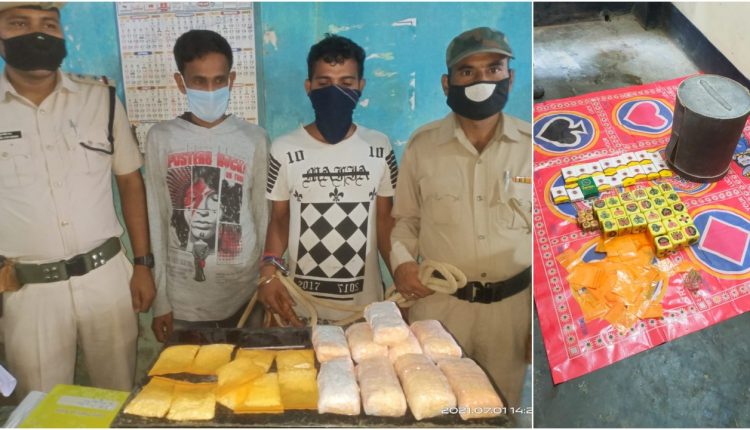 In another event of the state’s anti-drug campaign, the Cachar police in collaboration with the Special Task Force (STF), Cachar has apprehended two persons in Ashram road today in possession of yaba tablets and one scooty. The incident happened near the Anukul Ashram in Ashram road of Silchar when police stopped two people riding a scooty and when inspected, discovered 20,000 yaba tablets worth around Rs 20 lakhs hidden inside the scooty boot (dikki). When confronted about this, and based on their intel, the police raided the house of one Ajoy Debnath in Rangirkhari and recovered some gambling items from the house. Meanwhile, the police couldn’t apprehend Ajoy Debnath as he had already fled his house by then.

OC Sonai and a team of STF, Cachar led by Manoj Rajbongshi stopped the two miscreants today riding on a scooter near Anukul Ashram of Ashram road for inspection. After inspecting the scooter, the police were able to recover 20,000 yaba tablets stashed inside the trunk of the scooty. “As stated by the detained person, we searched the house of one Ajoy Debnath of Rangirkhari, but he had fled away. During the search, we recovered some gambling items, mainly dices of Jhandimunda and gambling cards from his house”, said Manoj Rajbongshi.

The two arrested miscreants were, Bappan Rai, S/O Late Swapan Rai, of Shiv Colony area of Silchar and Nripesh Das, S/O Late Kunja Bihari Das, of Tapuban Nagar area of Silchar. Meanwhile, the police are still searching for their co-conspirator Ajoy Debnath, who is still at large and from whose residence gambling items were recovered. According to the detained’s statement, they were on their way to transport those yaba tablets to Ajoy’s residence before they were stopped in Ashram road and inspected by the police. Sources also claim that each of the yaba tablets that were seized from the trunk of the scooty usually cost ₹100 in the market.

Ever since the Himanta Biswa Sarma led BJP Government has come to power, the administration has ramped up its anti-drug campaign throughout the state, with Barak Valley being one of its hotbeds. Over the last few weeks, police and STF have raided and busted several illicit drug dens and were able to seize substances worth accumulatively crores of rupees. And just like in this case, yaba tablets have been the most common find in these drug raids of police, which perhaps indicates the high demand for this illicit drug in the state.