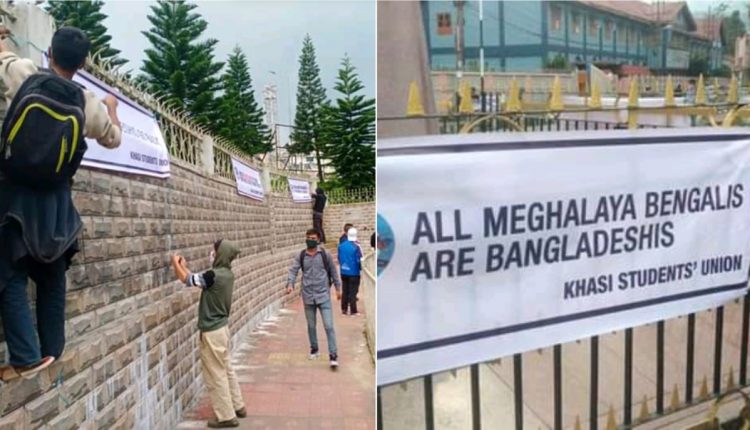 "Spoke with CM about the banners," MP Rajdeep Roy, "Racial profiling is unacceptable," Sushmita Dev on "Bengalis are Bangladeshis"

“Today at Police Bazar I got called Bangladeshi. I have never visited Bangladesh in my life, my parents worked for the government of India till retirement. But more than Khasi Students’ Union the organisation that published those banners, what bothers me is the silence of Bengalis all across the country and the world. Also, those in central India, who sing Kagaz Nahi Dikhayenge Hum, where are they now when we are called Bangladeshis in our own country on the basis of the language we speak. It is not just the Khasi Students’ Union and their mindset that stands exposed today, racism in India reaches a new height,” this is what a thirty-year-old resident of Meghalaya had to say last evening.

The walls that read “Stick No Bills” were filled with banners that read “All Meghalaya Bengalis are Bangladeshis.” It did not just end with racial profiling in the heart of the town. The Khasi Students Union went ahead to interfere in an ongoing interstate border dispute between Assam and Mizoram. In another banner, the Students’ Union published, it was written, “Bangladeshis stop atrocities in Assam, Tripura, Meghalaya and Mizoram.” Mizoram in that banner looked like a late addition as the colour of the font was different.

The Bengalis in Meghalaya are petrified and those living in Barak Valley who have to travel via Meghalaya each time they want to travel to the rest of Assam and the country are having nightmares. The demonstration against Bengalis yesterday is not a stray event that took place. Reports of violence in Ichamati and atrocities against Bengalis have been doing rounds for a while now.

“The moment I got to know about the postering that is going on in Meghalaya I spoke to the honourable CM of Assam and brought them to his notice,” said Silchar MP, Rajdeep Roy. “Thankfully, after the reaction on social media, we have got to know that the Meghalaya Police has removed the posters. This piece of news was published on a local web publication,” MP Roy added.

The MP added that in the Northeast, such activities (targeting Bengalis) around the Durga Puja has become “like an annual event that continues till Christmas.” “It is very unfortunate that in a cosmopolitan society this has become a yearly event. In India, we all have the right to speak our language and we must respect the multilingual nature of the country,” added Roy.

Mahila Congress President and former Silchar MP Sushmita Dev says she is contemplating the option of visiting Meghalaya in person to take stock of the conditions of Bengalis living in the state. “Extremely distressed to find out the way Bengali speaking people are being treated in Meghalaya. I have got many calls from traders in Meghalaya and they have told me that they are not being given business licenses. Then the banners that were put up amounts to racial profiling on the basis of language which is absolutely unacceptable. I would like to point out here that the right to life which is a constitutional right is a right of every Indian,” said Dev.

Dev asserted that the Bengalis are living in Meghalaya for decades. “I am considering visiting Meghalaya with a delegation to find out what is happening with the Bengalis in the state. Like a fact-finding committee of sorts.”

Former Governor of Meghalaya, Tathagata Roy has also condemned Khasi Students’ Union’s act. He said, “I say this taking full responsibility as ex-Governor of Meghalaya, KSU needs to be banned just like HNLC. It is an anti-national terrorist organisation, threatening Indian citizens, some of whom are residents of Meghalaya since British times. Like my family on both sides,” Roy tweeted.

Amra Bangali, a group that has been demanding CBI enquiry on the recent incidents in Ichamati has also condemned the posters and the language used by the Khasi Students’ Union. “There are atrocities against Bengalis happening almost every day and now the posters make it public. We urge the government of India to immediately intervene to provide security to the Bengali population living in Meghalaya,” said Sadhan Purkayastha from Amra Bangali.

General secretary of the Khasi Students’ Union Donald Thabrah said that they have decided to protest with the posters after continuous intervention from groups with a vested interest. (Read Here: Racial Profiling In Meghalaya Goes Viral, “It Is A Response To The Interference,” Khasi Students’ Union).

On the eve of Durga Puja, because of the posters, the cold Shillong air is now filled with the perfume of fear. How the local government deals with the situation remain to be seen.