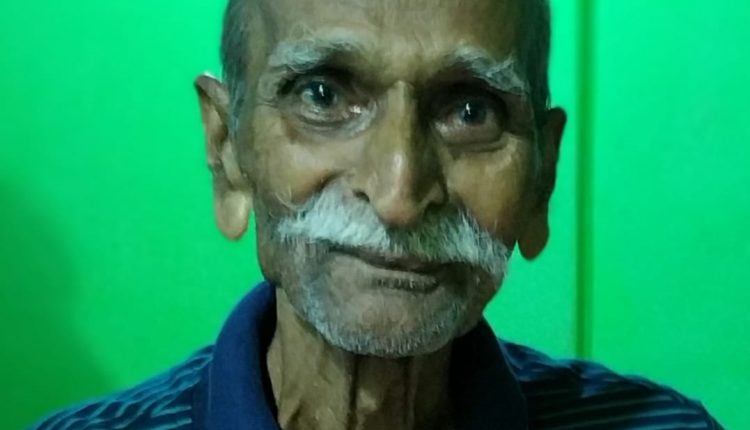 ‌He was a fighter in his days, didn’t consider an inch of ground without resistance. Bharat Hazam is also fighting for his life, he has turned old, and eventually many diseases gripped his health, but he hasn’t stopped fighting back.

Bharat Hazam suffered a stoke before Durga Puja, he had to be admitted to the hospital. He was taken to home after recovery. But, again he had a brain hemorrhage on Laxmi Puja, he was rushed to a local hospital immediately. He was taken to a ICU this time. Spent a few days in ICU, from there he has made some improvement, and he was transferred to the general cabin. His test reports also came normal. He was released from hospital on Wednesday. But he has become feeble after having two consecutive strokes. ” Father is doing much better, but he is weak, he is only having liquid foods,” said Bishwanath the youngest son of Bharat Hazam.

Before this he had COVID, he was able to fight back from the killer virus, but many post covid symptoms were developed later on. He had an infection in his chest. For which he had to spent few days in a local nursing home.

Bharat Hazam was a versatile player. He represented his district in both football and cricket. He played the cricket school tournament in 1966. Besides Sikchar, he had also represented Karimganj and Dhubri. He played for Karimganj and Silchar from 1968-1971 and 1976-1981 respectively. For Dhubri he played between 1983-85. He was a right handed opener batsman.

He played his first club football tournament in 1955. He joined PWD in 1963. Before that he has played for town club. In 1964 he got a job in Fire Service. He went to Nagpur, Mumbai for training. In 1965 he returned to Assam. He was posted in Jorhat. He played leagues there. He was also the part of Assam Fire Service football team. Once he had got the call from state team too. He could achieve many more as a footballer, but he had to left for football for his knee injury.