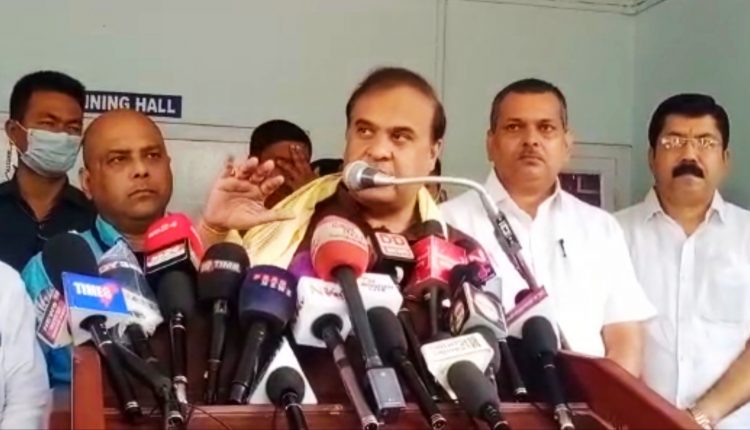 State Govt. entities in Silchar to be shifted to the outskirts: CM Sharma elaborates the plan to create space and expand the city

Over the weekend CM Dr. Himanta Biswa Sarma was physically present in Silchar and was on his official two day visit to Cachar. He announced a host of gifts and aids for the region and visited a number of places where he interacted with the crowd. On Monday morning just before leaving for Guwahati from Circuit House, Silchar, CM Sarma addressed a press briefing where he summed up his entire visit and also made some crucial announcements.

He announced that he has kept aside a sum of 50 crore rupees for the purpose of making a new integrated DC Office which will be shifted from its original place. CM Sarma also announced that once the new DC office gets functional and running, all other related departments of the State Govt. will also be shifted into the same premises. He also said, “The Circuit House and the Silchar Central Jail will be shifted to new places so as to get govt. land freed up in the middle of Silchar where other development projects can be undertaken just like Guwahati. Silchar has no extra space available and the only way out will have to be extending the urban areas to its outskirts. The old remaining land after the shifting is performed can be used for various other infrastructural needs of the city.”

The Deputy Commissioner of Cachar, Keerthi Jalli has been asked by CM Sarma to complete the land allotment at the earliest so that PWD Dept. can start the construction of the new DC office soon. There were also a host of other points from his trip which he reminded the press about.

1. Overall development of the Bhuban Hills and an all weather motorable road to be completed by next 2 years and be funded as per estimates.

2. The ruins of the Kachari Kingdom in Khaspur area has a great significance in our history and has a large potential to attract tourism. A Kalakhetram will be built there and the entire area will be made into a mega tourist destination.

3. SMCH and it’s development remains key, with a Cath-Lab coming very soon and a 500 bedded hospital in the pipeline.

4. The Cancer Hospital with all its modern and state of the art infrastructure will be functional within a year and will be available for the service of the public

5. A proposed flyover from Rangirkhari point in Silchar is on the table and the Chief Engineer will soon check the viability of the proposal.

6. The construction work of Mini Secretariat at Silchar for which 116 crore INR has been sanctioned will start with full force after Durga Puja.

7. The Silchar Ring Road (Bypass) to be completed as soon as possible alongwith all other pending and undone road construction and repair works. CM Sarma to visit Silchar on Mahasaptami to check the condition of the work done.

8. CM Sarma to stay in Karimganj for 2 days in October so as to resolve the Karimganj Medical College issue.

9. About the two defunct industries of the Hindustan Paper Corporation, he said, “I am confident that very soon I will be able to resolve the issue of these two paper mills.”

10. Govt. to promote all kinds of businesses and commodities if it is being done in a legal manner and the Govt. also gets a share of the revenue in the form of taxes.