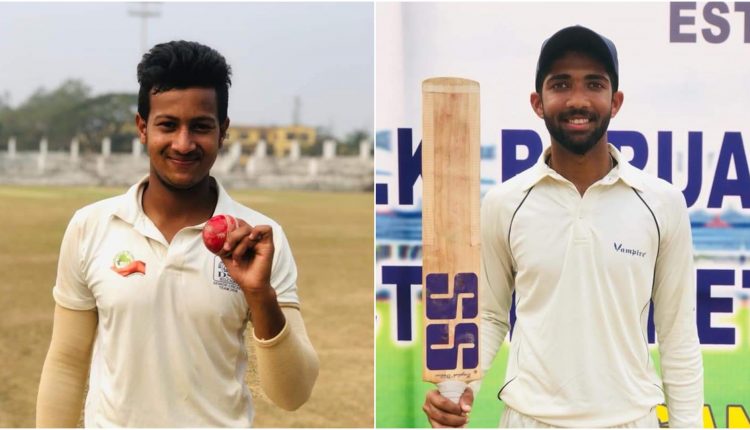 In JK Baruah under 19 cricket, Silchar turned up against Karimganj at Satindra Mohan Dev Memorial Stadium earlier today. In the 50-over match, Silchar’s skipper Subhajit Paul won the toss and decided to bat first. Deep inside, the players of Silchar had memories of last year’s defeat. Karimganj had knocked Silchar out of the tournament.

Aman Singh and Parvej Musaraf gave Silchar a stable but slow start. 54-run opening partnership got disrupted when Aman Singh (21r of 55b) tried to improve the strike rate. Parvej Musaraf (25) was the next one to walk to the pavilion and it looked like a batting collapse. Man in form, Krishanu Dutta (15) could not continue his good run of form and despite getting a start Roshan Topno (34) failed to post a big score. Dibakar Goala (2) and Gaurav Topno (11) too failed to produce a partnership.

After 34 overs, Silchar’s score was 107 for 5. With the team under pressure walked in the skipper, Subhajit Paul. On a slow and turning wicket, he has played an innings that turned out to be the difference between the two teams. Paul scored 52 runs with a strike rate of 102. Took Silchar’s score to a respectable 202, meaning Karimganj had to score at more than 4 runs per over. Sourav Das, Sourav Dey and Deepan Kumar Nath picked two wickets each.

Chasing a low total, Karimganj needed a decent start. But it was chaos and carnage their batting line-up. The man who scored a century for Silchar in the match against Hailakandi turned it square with the ball today. Parvej Musaraf, who plays for the India Club in Super Division ran ruckus in Karimganj’s batting order. It was his spell that helped Silchar bundle out Karimganj for just 80 runs in 28.3 overs. His spell – 9.2 overs, 1 maiden, 29 runs, and 6 wickets. Samir Sinha pitched in with two wickets and Silchar became the Zonal champions.

Now the under-19 team will progress in the tournament with the badge of Zonal champions. They will take on other Zonal Champions. Assam Cricket Association is yet to disclose the schedule of the tournament.