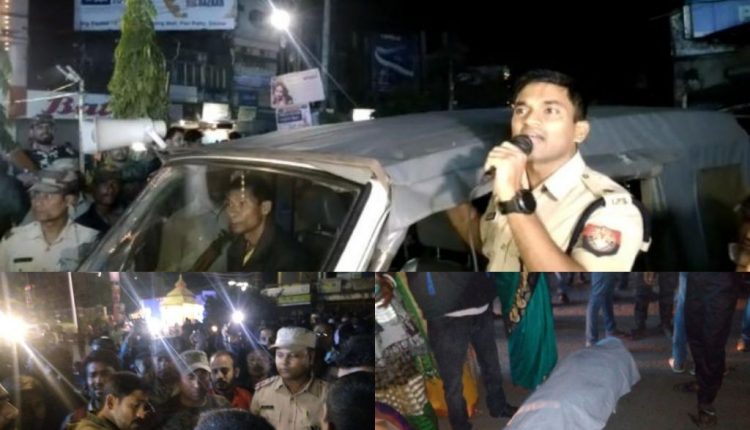 Sujit Das’ wife and a crowd of 400 gather in Rangirkhari with his dead body; demand for justice

Deceased Das’ wife was heard saying, “They were shooting video when my husband was bleeding and crying for help. They have brutally murdered my husband. I have a small kid and they are threatening us non-stop. I demand justice for my husband, I want punishment for the murderers of my husband.”

The crowd has blocked the road in Sonai Road point area, next to Netaji Subhash Chandra Bose’s statue and no vehicles are able to go towards Silchar Medical College from town. The additional SP initially tried speaking to the family members in person, but that did not help as the crowd kept getting bigger. He then took the handheld loudspeaker and announced, “I am the additional SP of Cachar, I have come here to ensure you all that we will nab the culprits as soon as possible and justice will be served.” Rakesh Reddy added, “You all are insulting the dead man by keeping his body in the middle of the road.”

Latest reports coming in states that after a two-hour long blockade the road has finally being cleared at about 11:30 pm. Reddy assured the crowd that action will be taken in the next 24 hours.

Sujit Das, who originally hails from Borjalenga was a resident of Taruni road in Silchar. Monday night at around 10 PM he was riding back to his home when his scooty allegedly hit a pedestrian, who as per sources got mildly injured. Immediately after the minor accident took place in Shiv Colony area, a group of people gathered and started beating Sujit Das. He was left unconscious and bleeding when the ward commissioner rushed to the spot and escorted him to Silchar Medical College. From there, the doctors referred him to NEIGRIHMS Shillong for better treatment. Yesterday, he was declared dead by the hospital authorities in Shillong.

Sujit Das beaten by the public in Silchar, dies; "We will investigate" says Rakesh Roushan