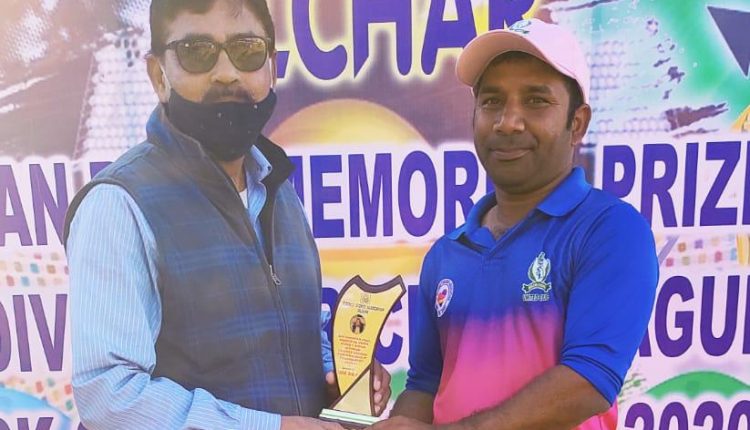 Defending champions United Club played India Club in the first semi-final today at Satindra Mohan Dev Stadium. Winning the toss, Masarob Hussain Laskar decided that United will field first. There was moisture in the wicket and the United bowlers managed to rake in the benefit from the pitch. India Club batsmen could not withstand the storm unleashed by the United Club bowlers.

Govinda Rajbongshi (9) was dismissed early by Nihar Paul. Man with a century under his belt, Parvej Musaraf (17) showed some promise but then his innings was cut-short by Sukanta Dey. That opened the flood gates India Club batsmen rallied to the pavillion one after another. Captain Rehan Jomail Mazumdar (8) could not continue his run of form as he got out facing left-arm spinner Nirjhar Das. Nirjhar tricked other middle-order batsmen in form – Ikramul Ali for a duck.

At one stage, 100 looked far fetched for India Club. They were 95 for 8. But Arman Khan (23) and Amarjyoti Kalita’s unbeaten 28 took India Club to respectable 143. Sukanta Dey picked up three wickets and Abhay Yadav and Nirjhar Das both pitched in with two.

In the league stage, spinners, Rudrajeet Deka and Chandradip Das tricked United’s batsmen and won the match. Rehan and his company were eyeing a repeat of the same in the semi finals. On the other hand, United did not play champion-like cricket throughout the tournament.

In the semi-finals, the champions showed characters. They gave no chance to India Club bowlers. United’s Batsmen knew that if they do not give away wickets to top bowler in the tournament – Rudrajeet Deka, they will win the match. They executed the plan to the T. Rudrajeet ended the spell wicketless and United won the match.

Top scorer in the league Pradip Sarkar (22) gave United an aggressive start. Best batsmen of last year, Raju Das was struggling again, but he did not give away his wicket. He scored a slow but crucial 20 of 49 balls. The match-winning innings came from Sukanta Dey (59). His all-round performance got him the man of the match.

United won the match in 35 overs after losing only five wickets to book a berth in the final. They will now play the winner of other semi-final between Town Club and Itkhola Club.