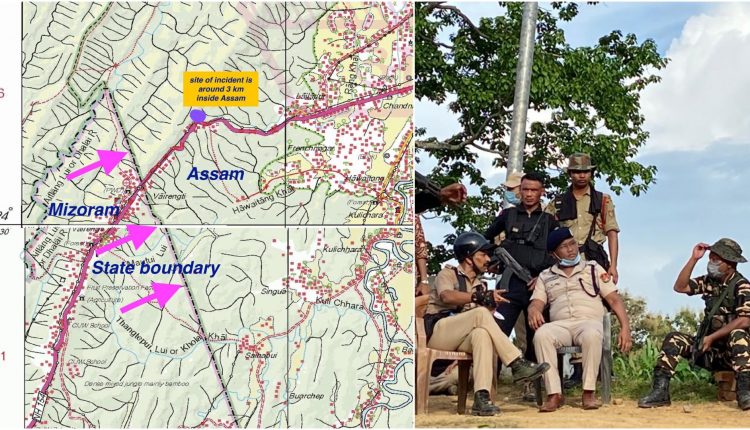 How many rounds were fired, what ammunition was used, and who fired first…these questions are being discussed again and again on multiple platforms Another major question is where did the incident happen. The Mizoram Chief Minister, Pu Zoramthanga said that the Assam Police encroached into Mizoram and opened fired first. The Assam Chief Minister blamed the Mizos.

The firing on July 26, left six Assam Police personnel dead and as many as 60 injured. Special DGP, Assam, GP Singh said that the Mizos were in a position of advantage and opened fire from the hilltop. Caught off guard, Assam Police and delegation at the border had no option but to go down or retreat to save lives.

Divisional Forest Officer, who himself was at the spot, published the Survey of India Map to show where the incident occurred. “The toposheet of 2005-06 of Survey of India clearly shows the boundary between Assam & Mizoram. The Mizoram Govt is peddling lies among its citizen and making a fool of itself before everybody by claiming the Assam land as its own,” stated DFO Sunnydeo Choudhury.

The top officials in the government of Mizoram including the chief secretary, Lalnunmawia Chuaungo rubbished the Survey Of India Map. In an interview with Barak Bulletin, the chief secretary said, “There is no demarcation, there is no ground verification. Whatever map has been drawn, it has been drawn on the table on paper without any verification on the ground. None of these boundary lines drawn by Survey of India is verified on the ground. Survey of India map is based on imagination and their understanding. So, according to us, all the land we claim are within Mizoram.” Read the full interview here.

Indian officials and MPs argued that if the Government of Mizoram is unwilling to accept the Survey of India map, it should approach the central government and ask for a review. “There is no point in firing bullets at DCs and SPs. They are just doing their duty of protecting and surveying their borders. But it is clear that the Mizoram does not want an amicable solution and instead wants to prove superiority by flexing muscles and killing countrymen,” added an officer in Dispur.

The Mizoram claims that the entire forest area in Lailaipur at the Assam-Mizoram border belongs to the Mizos. They say it is the Lushai Hills that became Mizoram and so the entire Lushai hills should remain to the Mizos. They go by the Bengal Eastern Frontier Regulation of 1873 where the British demarcated Lushai Hills. “How can you ignore an India map and go by something that dates back to 1873. Mizoram was a part of Assam and there are still many Mizo settlements in Assam. The Mizoram has now started claiming all the Mizo settlements to be within the territory of Mizoram,” argued Rajdeep Roy, MP Silchar.