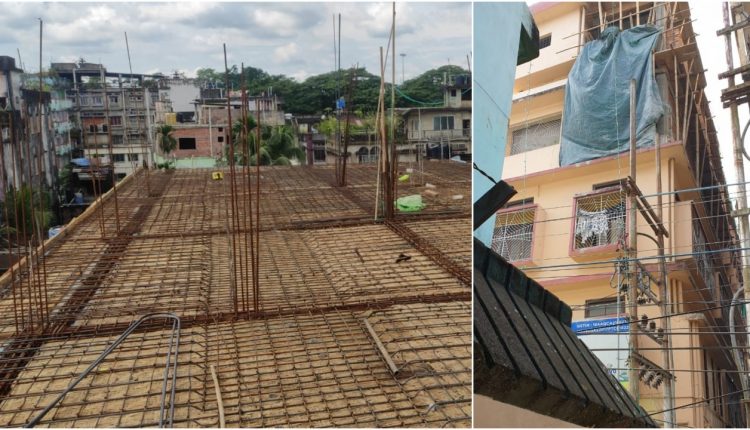 Nag Naha Lane is one of the premium areas in Silchar town for both commercial and residential purposes. It is also one of the most expensive zones, which means only a few can afford. In Nag Naha Lane there is Sasadhar Villa which now finds itself in a controversy.

The building with Ground +2 floors permission has third and fourth floors under construction. The first floor is owned by Gopal Krishna Chakraborty and the second floor is owned by Manik Chand Lunia. The original owner of the plot and building is Manashi Bhattacharjee wife of Dr. Shankar Bhattacharjee. However, their names are missing in the latest updated ‘Jamabandi’ in settlement office.

On August 19, Manik Chand Lunia and Gopal Krishna Chakraborty submitted a written complaint to the Silchar Municipality Board. In the complaint, the complainants stated that two floors are being constructed by a man identified as Anil Golchha. Who is Anil Golchha?

The property is at the heart of Silchar Municipality area and therefore, to construct two additional floors, the owner must procure the permission from the concerned authority. The construction work started in August 2021 and on September 9, 2021, the Executive Officer of SMB issued a notice urging the owner Manashi Bhattacharjee asking, “You are hereby asked to submit NOC/Permission regarding your ongoing construction permission/NOC within 3 (three) days from the date of receipt of this notice. Also you are directed not to continue any further construction work forthwith. In the event of your failure to comply the above direction necessary action will be taken from this end.”

After this notice, the number of labourers only increased and the construction work continued at war footing. Two more floors have already been added to the building. “The owner of the building, Manashi Bhattacharjee procured permission to construct two more floors and based on that permission, the construction was carried away,” said Anil Golchha. He added, “I am a law abiding individual and not a brick has been installed without valid permission.”

While, he was confident in claiming it, the documents tell a different story. When Anil Golchha said he has the permission in his possession, Barak Bulletin correspondent insisted him to share the same. Here is a copy of what he shared.

What Anil Golchha is furnishing as permission to construct two floors is basically, nothing but an application for the same. Moreover, Manashi Bhattacharjee only applied for permission on October 4, 2021, by then, the two floors were already constructed.

Barak Bulletin sent the same document to Silchar Municipality Board and asked if this is permission to construct two floors. Here is what the official reply from SMB read, “This is receipt of an application for building permission. People apply for permission. We issue a receipt for the application. Thereafter we enquire, verify their papers, take legal opinion if required and if all is ok we issue permission.”

So, it becomes clear that under the nose of Silchar Municipality Board, two floors got constructed and the officials did nothing despite several complaints. Each time, the SMB issued a notice, it remained “not received” as Manashi Bhattacharjee remained unavailable. On October 30, eventually after the intervention of Silchar Sadar Police Station, the notice was delivered. “We have been given 21 days to respond to the notice and we will do so legally,” said Shankar Bhattacharjee while boarding a flight.

Construction of two additional floors without procuring any permission is not the only discrepancy in this case. When Shankar Bhattacharjee is saying that after selling ground and roof to Anil Golchha, Manashi Bhattacharjee does not have any stake in the property, why is Silchar Municipality Board issuing notice to her. That means someone is lying. Also, in what capacity is Anil Golchha commissioning construction work if he is not the owner of the property? If sources are to be believed, Anil Golchha met Executive Officer of Silchar Municipality Board, JR Lalsim in presence of renowned industrialist Mulchand Baid. In what capacity did Golchha meet the officer?

President of Foodgrains Merchants Association, Mulchand Baid clarified to BarakBulletin that he had gone there along with the Secretary of the body, Deepak Paul to hand over an invitation card to the executive officer. “I have nothing to do with the alleged deal and the person in concern (Anil Kumar Golchha) happened to bump into me at the office of the Executive Officer. He just said namaste to greet me and I responded. I don’t even know why he went there and have no clue about the building in concern,” said Baid.

On the other hand, documents sourced by Barak Bulletin expose a possible involvement of ‘Hawala’ money in the deal.

Gopal Krishna Chakraborty purchased the first floor of the Sashadhar Villa from Manashi Bhattacharjee in 2019 for Rs 99,00,000 (99 lakh). Two years later, February 2021, Manik Chand Lunia bought the second floor of the same building for Rs 30,00,000 (30 lakh) only. A price drop by 70% in Nag Naha Lane is too tough to believe that too in a building with elevator. For Rs 30 lakh, Lunia got 2200 square feet floor while Gopal Krishna Chakraborty’s Rs 99 lakh got him only 1828 square feet. On August 29, 2021, Anil Kumar Golchha bought the ground floor of the property for Rs 40 lakh only. Former ward commissioners, chairman and others accustomed to land dealings said that these prices hint towards huge black money transactions and the administration must investigate immediately.

“I have paid the rate that is currently applicable in the market. If someone paid more, it is not my fault,” said Anil Kumar Golchha. “I have donated the entire money that I have got from this property to a seva kendra in Kolkata. I believe in philanthropy and all the transactions carried out have been done by following the law of the land,” said Shankar Bhattacharjee. Barak Bulletin got in touch with a party that was interested in buying the ground floor. There are evidence that Bhattacharjees were asking for a Cash plus Cheque deal.

In September 2021, Cachar Police arrested few high profile individuals after finding that they are involved in land scam. It was Cachar Police’s way of echoing – “Zero Tolerance” when it comes to land scams. Here is a multi crore dispute at the heart of the town, how the Municipality Board, District Administration and Cachar Police investigate the matter is something that remains to be seen.

The story has been updated: A statement from Mulchand Baid has been added to the story.