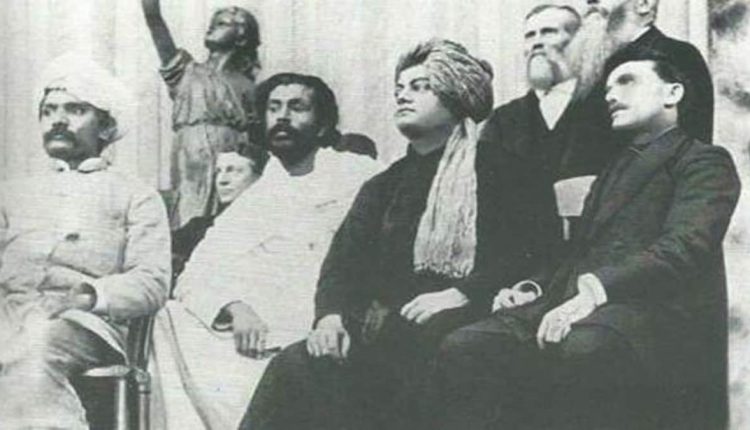 Many in India remember 11 September primarily for the Al Qaeda attacks in New York and Pentagon in the US that happened 20 years back on the day. But more than a century back in US only, on the same date in 1893. in the Windy City of Chicago, Swami Vivekananda delivered a historical speech at the World Parliament of Religions that has impacted our civilisation, religion and culture.

This speech was so short, simple, extempore and yet profound in its essence as the 30 year old monk laid out the message of universal tolerance and universal acceptance that Hinduism as a religion and Sanatan dharma as a way of life practised and preached. He started the speech with ‘Sisters and Brothers of America, It fills my heart with joy unspeakable to rise in response to the warm and cordial welcome which you have given us. I thank you in the name of the most ancient order of monks in the world, I thank you in the name of the mother of religions, and I thank you in the name of millions and millions of Hindu people of all classes and sects’. With this introduction, he mesmerised the audience and won so many hearts that the mostly Christian audience made him deliver five more lectures at the gathering over the next 15 days. Not only he boldly laid out the strength of Hinduism to the western world and the many instances when the Indian civilisation accepted all, his graceful presence, delivery and confidence ashamed all the naysayers about India. As the bold ambassador of the Indian civilization and culture, he mentioned about the instances of India being a land which never refused shelter to anyone. He even didn’t miss to mention his boyhood hymn in the speech: “As the different streams having their sources in different paths which men take through different tendencies, various though they appear, crooked or straight, all lead to Thee” thus reminding all about his guru Ramakrishna Paramhansa who always said ‘Joto Mot Toto Poth’ ( as many minds, as many paths) but all lead to God.

The impact of this participation of Swani Vivekananda in the Chicago meet was immense. It generated respect for Hinduism across the world and made Indians across the subcontinent then under British rule proud. Vedanta and Yoga became known to the West and Hinduism got attention across the globe as a world religion to be explored and respected.

Bipin Chandra Pal an eminent lawyer and editor hailing from Sylhet and of the Lal-Bal-Pal fame had written in Indian Mirror that on 14 February 1898, he was wearing a saffron turban and walking and had lost his way somewhere in southern London and was looking at the corner of a street thinking in which direction he should go when a lady with a young boy walked up to him and offered help and showed him the way. She also told him that she read in the newspapers that he was coming to London and as she spotted him told her son ‘look there is Swami Vivekananda’. Pal mentioned how Vivekananda had become a respected world figure and the lady venerated Vivekananda even before she met him and he was the beneficiary. Even Bal Gangadhar Tilak had written in Marathi in Kesari on 8 July 1902 about how Vivekananda had taken upon his shoulders the task of spreading the glory of Hinduism in different parts of the world and had brought glory to the land.

Both Rabindranath Tagore and Netaji Subhas Chandra Bose had special respect for Vivekananda. Tagore had told the well known French Nobel laureate Romain Rolland “If one wants to know India, study Vivekananda: in him everything is positive and nothing negative”. Netaji had mentioned about Swamiji being the spiritual father of the modern nationalist movement by preaching the gospel of harmony of religions. May be a coincidence, but Netaji had chosen Jana Gana Mana as the national anthem for free India and on 11 September 1942, he was part of the maiden rendering of the song by the Hamburg Radio Symphony Orchestra on the occasion of the founding meeting of the German-Indian Society at Hotel Atlantic in Hamburg in Germany.

In today’s world of social media charlatanship and accompanying appropriations, Vivekanand’s universal message of Hinduism and it’s tolerance is sometimes lost. Indeed it is heartening to see so many messages of Swamiji being spread across WhatsApp and Facebook posts by individuals and on Twitter by politicians but most fail to follow the ideals and messages of Swamiji. He elevated Hinduism to that of respect across the globe and it is a duty to maintain that respect by following the principles of tolerance. No organisation can claim to be the repository of Hinduism and the Hindu essence of life, it is even Joto Mot Toto Poth even within Hinduism.

As we remember the great saint and motivator, I’m tempted to recall here the first four lines from the first stanza from Rabindranath Tagore’s poem Prashna (Question) published in 1932 where he writes

Translated it would be :

O Lord, from age to age

The saints carried Thy message

To love all was their sermon

Get rid of the malice too.

Indeed Swami Vivekanda was the Saint sent by God to show to the world what Hinduism stood for.

The author is a globally recognised commentator on cyberspace issues and former country head of General Dynamics. He is the founder and director of JOOKTO, an organisation that works in supporting and connecting the underprivileged across sectors.