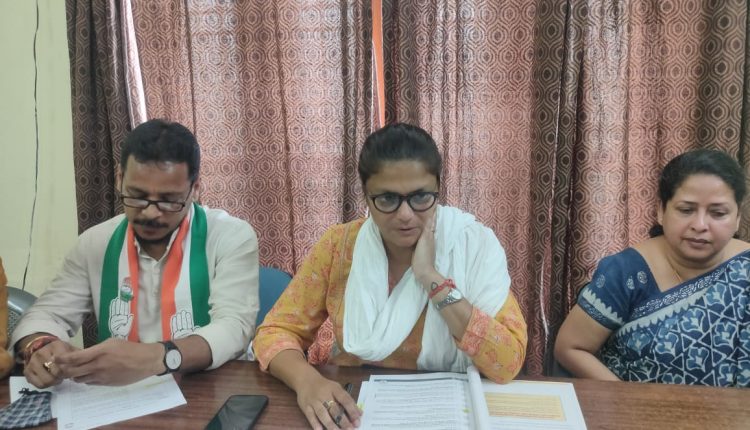 "The BJP's Manifesto is Anti-CAA" claims Congress; "If NRC is flawed, then why did Amit Shah call the excluded ones 'termites'?" asks Tamal Banik

Recently, the manifestos of both the parties, the BJP and the Congress, have been released and have sparked controversy. In particular, the way in which the BJP’s resolution letter has openly stated that the NRC will be corrected and no one from outside the country will be allowed to stay in the state, which is going against the party’s long-standing assurance. On Thursday, Congress called a press conference and made various remarks on the BJP’s manifesto. Sushmita Dev, President of the All India Mahila Congress (AIMC) and former MP from Silchar, Sharmistha Mukherjee, daughter of former President of India Pranab Mukherjee, Congress candidate from Silchar Tamal Kanti Banik and others took part in it.

Sushmita Dev said, “Through this manifesto, the BJP has admitted that it has completely failed in the NRC process. However, the way their party is clamouring about the CAA getting passed, this year’s manifesto is the polar opposite. They claim no one from Bangladesh who has taken refuge in India will be allowed to stay in Assam, while the sole purpose of enacting this act is to protect these refugees. Illegal immigrants are those who do not have any documents to enter India. These are the victims of partition, and the BJP has written about expelling them. This makes their real purpose clear.”

She said, “Congress was never against NRC. It started during our government but unfortunately, it was delayed for various reasons and then the government changed. Even after spending so much money in the name of NRC, the BJP is now saying in writing that they have failed in that task. However, just because the team has failed, the responsibility will not go away. While participating in this process, the suffering of the common people has been completely denied and it has been mentioned that the process should be started anew. It is not a good idea to treat the people who have been subjected to repeated suffering in the country due to partition as criminals.”

The BJP’s manifesto had promised to restart the paper mill in Nagaon but did not mention about the paper mill in Cachar. The workers of both the paper mills are protesting together, but this time a mysterious atmosphere is suddenly developing. In this context, Sushmita Dev said, “The Congress party has never denied its involvement in the process of closing down the paper mills. But then the situation was such back then that it was inevitable to move towards such an outcome. However, it should be remembered that when Santosh Mohan Dev was the Minister of Heavy Industries, this paper mill was called one of the mini Navaratnas of the country. The BJP is cold-bloodedly enhancing the gap between the two paper mills, claiming that one will be renewed and the other one they’ll just settle the employees’ pending wages. With taxpayers’ money, the entire property will be handed over to a corporate by just settling the pending wages.”

Sushmita Dev also said that the party’s manifesto did not match with the various speeches of Chief Minister Sarbananda Sonowal. In that context, she said “The Chief Minister claimed that they view the two valleys equally but in their manifesto, only the Barak Valley is looked down upon. I would say that this time they have exposed themselves through their lies. Those who have been excluded from the NRC today would have had no problem if Sarbananda Sonowal had not repealed the IMBT Act. The BJP once claimed that 25 lakh jobs will be provided, recently it was heard that 10 lakh jobs will be given, now it has been seen in the manifesto that only 2 lakh jobs will be given. This means that they are repeatedly pointing out the failures of their own promises. Silchar MP Rajdeep Roy is also responsible for the way the Barak Valley was neglected. He was a member of the Manifesto Committee but Barak was ignored in front of him and he chose to remain silent. We want to tell the people to keep their eyes and ears open, read the manifestos of both the Congress and the BJP and then vote after recognizing the real enemy here.”

Speaking at the event, the daughter of former President Pranab Mukherjee and National Congress spokesperson Sharmishtha Mukherjee said, “There has never been any pushback in the history of India. Our ideal should be of acceptance. My father used to say that we should be sympathetic towards those who came to India from East Pakistan as the victims of partition. Bangladesh will not take anyone back in any way, and a few people cannot be just targeted as foreigners and left in the detention camps for generations to suffer. Hence, the BJP’s manifesto and the claim are completely inhumane.”

Silchar candidate of Congress Tamal Banik said, “Senior BJP leader Amit Shah called the people who were excluded from the NRC list as ‘termites’. Now, they believe that the list was flawed and a corrected list will be made in the future. Those who make such claims can never be trusted to make any list in the future. The way they’re discriminating Cachar in pen and paper, the true motive of the BJP has been exposed to the people. Our responsibility is to understand all this and provide the right answer.”