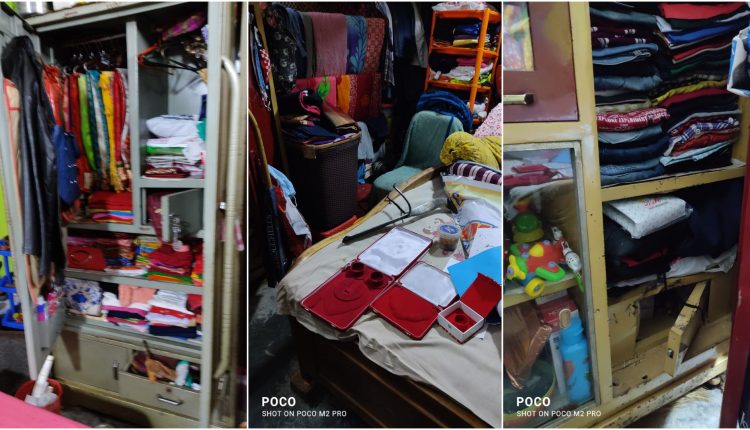 Radhamadhab Road is located in the heart of the town. The area is sensitive as Silchar MP, Rajdeep Roy lives there. Within 100 metres from the member of parliament’s house is the resident of Ranu Paul Choudhury. The house was looted by miscreants last evening.

Tenant in Ranu Paul Choudhury’s residence, Biswajit Paul has filed a police complaint stating that his house was looted by thieves. Hos wife Rupa Paul had gone to an ailing relative’s house with their schoolgoer child. She locked the house at around 5:30 pm. Businessman, Biswajit Paul returned home at around 6:30 pm and saw that the door is open.

“I knew that my wife has locked the door and gone to a relative’s house and that is why I was surprised to see the door open,” said Biswajit Paul. His surprise turned to shock when he entered his house. “The wardrobe was open, the entire house was a mess. I immediately realised that we have been looted,” he added.

Paul has a business in Fatak Bazar and as per his statement, he had kept Rs 2.5 lakh cash at home to disburse some payment. There were gold ornaments kept inside the wardrobe and Paul said all of that has been stolen. According to the Police complaint, cash and jewelry combined, Biswajit Paul has suffered a cumulative loss of around Rs 5 lakh.

The local police rushed to the spot immediately after they were informed. Officials from the Rangirkhari Police outpost surveyed the spot of crime and the around it. The locals have blamed the Police for the theft that took place in the evening. “This exposes the lack of Police-fear among the miscreants. Also, a house which is located within 100 metres of the MP’s residence gets looted in the evening, image the level of security in the rest of the Cachar,” said the local resident. Another resident, however, countered saying it would be unfair to blame the MP and politicise the incident.

Officer-in-charge of Rangirkhari Police Outpost, Pranab Deka said that the Police is investigating the matter. He informed that there is a CCTV camera installed in the area and the footage revealed a set of people. “We are yet to identify them. The matter is under investigation and we will try to nab the culprits,” he stated.

The officer said that while Police’s role is to investigate the matter, the citizens need to be more aware in order to stop such unfortunate incidents. “With so much cash in the house, just putting a lock in the main door is not enough. We need to be more cautious,” he said.

According to the Data released by the Bureau of Police Research and Development (BPRD), there is a shortage of staff in Assam police. The data reveals although there should be one policeman against 500 people in Assam, there is one policeman for 605 people. It says although a policeman ideally needs to cover 1.19 square km, the shortage of staff has forced the official to cover 1.44 sq km.

Deka echoed the data and said there is a shortage of manpower in his jurisdiction too.