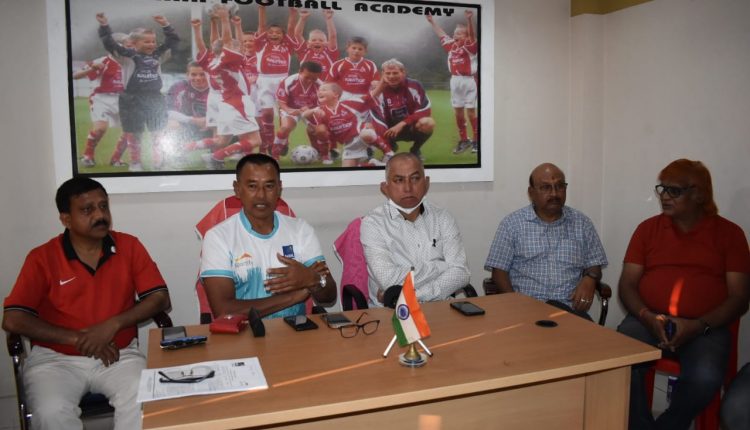 "There is a good pool of talent in this region, but football should be considered full time, not part time" says NRL Technical Director Ikendra Singha

Numaligarh Refinery Limited Academy (NRL) youth development head and AFC license ‘A’ coach S. Ikendra Singh is quite happy about being able to organize a selection trial camp in Silchar on March 3.

Ikendra Singh asserts that the North-east plays a pivotal role in Indian football where Assam also plays its part. Even in terms of National football, Assam is contributing a lot these days. NRL has conducted a selection trial for their academy in Silchar today which was managed by Silchar Football Academy. This is the reason why Ikendra came to Silchar, where he has visited several times before as well. But this time he has come on a special mission. Before Silchar, NRL has conducted selection trial camps in different places of Assam.

On Wednesday, 140 people took part in the one-day selection trial at the Silchar Sporting’s ground. Out of these, 16 have been selected by NRL for their academy. However, there were about 20-22 people in the trial who were caught in age fraud. They were excluded from the process because of their forged certificates. Subimal Dhar, CEO of Silchar Football Academy’s development program said that the entire episode is very unfortunate.

According to him, it is quite disheartening for such an incident to take place on such a beautiful platform, which happened due to lack of awareness. Leaving aside this one negative aspect, the biggest positive aspect of the trial is the participation of so many people from different parts of the Barak Valley.

Despite his satisfaction with the organisation of the trial selection camp, Ikendra Singha makes it clear that playing football part-time is not worthwhile. One must choose football as a career and devote to it the proper dedication and hard work. He says, “I am very happy at being able to organise this trial camp. But I will be even happier when we get more footballers emerging from this region who would play at the national level.”

The AFC License ‘A’ coach also said, “The North-east plays an important part in Indian football. The national team coach Igor Stimac has announced a 25-player squad for the upcoming international friendlies, of which 10 players hail from the Northeast. Seven from Manipur, two from Mizoram and one from Assam. This is no mean feat.”

Despite being neighbouring states, Assam is quite far behind Manipur in this respect. Manipur has become almost a footballer-producing factory at this point. But Assam has a long way to go here. Although Ikendra believes, the state does not have a shortfall in any aspect. In terms of raw talent or ability, the two states are comparable. Then why is Assam lagging behind?

In response to this, Barak Bulletin was told by the NRL Youth Head that, “In Manipur, football is not seen as a part-time sport. There, football has its own culture and its own traditions. That is the difference between Manipur and every other state in India in this respect. Manipur has a footballing culture. But it did not come about suddenly. It took time. That is why we are hopeful that it is also possible in Assam. We have to build up this footballing culture here as well.”

The 16 rising talents who took part in the training camp in Silchar will soon become a part of the NRL academy. Although its date has not been finalized yet. All the players who got opportunities in the academy are at the junior level, U-13 and U-15 categories. After Silchar, NRL will hold another such selection trial camp on March 5 in Haflong.

In Women's Football, the Silchar DSA is still lagging behind