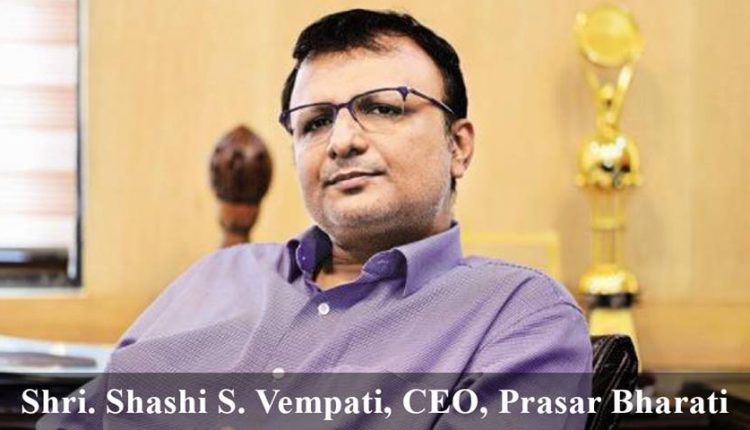 "There is no decision to stop local content being produced in Silchar, it will continue": Prasar Bharati CEO Shashi S. Vempati

This resulted in an outburst of emotion in Barak Valley where most of the people speak Bengali, Manipuri, Hmar while the DDK Guwahati broadcasts programmes largely in Assamese. This decision was interpreted as wrath against the linguistic minorities in Assam.

In a feature story published by Barak Bulletin (Read Here), former Prasar Bharati CEO, Jawhar Sircar (IAS) criticised the decision to stop local programming. In the same story, experts highlighted the importance of Doordarshan Kendra Silchar and emphasised how it plays a vital role in exhibiting local art and culture.

Reacting to the story, Prasar Bharati CEO Shashi Shekhar Vempati said, “There is no decision to stop local content being produced in Silchar and it  will continue.”

Speaking exclusively to Barak Bulletin, the CEO added, “People have misinterpreted the instructions that were given. There was no such order issued by us which mandated the Doordarshan Kendra Silchar to stop projecting local content.”

Soon after the news broke, a cloud of uncertainty started looming large over the employees in Doordarshan Kendra Silchar about their future. The CEO also made that clear as he shared, “Nobody is shutting any office.”

He suggested that before making comments that spur unnecessary controversies, one must seek clarifications if they have failed to interpret the order properly.

“I have personally taken a meeting in this regard via web conferencing this morning and instructed both teams (DDK Silchar and Guwahati) to ensure there is better coordination and to seek clarifications when in doubt rather than create an unnecessary controversy.”

Shashi Shekhar Vempati added, “Necessary clarifications and guidance have been given to DD in both Guwahati and Silchar.”

When we reached out to the Head of Programme in Silchar for a comment on her video conference with the Prasar Bharati CEO, she refused to divulge any details. On asked if the DDK Silchar, as suggested by the CEO, will start telecasting local programmes, she replied, “Time will tell.”

For now, the ones protesting in front of DDK Silchar can take a step back as the CEO confirmed, “Production of the local programmes will continue in Silchar.”