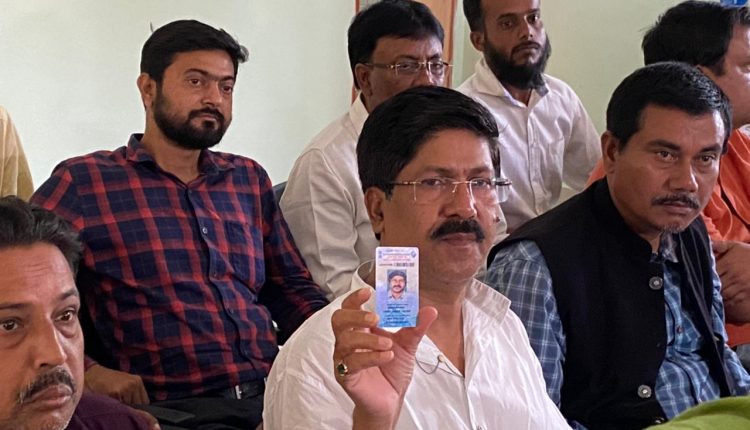 “They attempted to burn me alive and that is when security personnel opened fire,” Aminul Haque Laskar

The polling process in most of Cachar was peaceful yesterday. 72.28% of the electors turned up to cast their voters votes. However, at Sonai’s Dhonehori area, the election witnessed bloodshed.

Deputy speaker of Assam Aminul Haque Laskar had visited Dhonehori LP School, a Polling station in Sonai constituency yesterday while the polling process was on. That is when, things took a wrong turn. Fire was opened and three individuals got injured. Locals alleged that Aminul Haque Laskar opened fire himself with his revolver.

Today, Aminul Haque Laskar called a press conference at his own residence to put forward his version of the story. Laskar said he had got to know from his sources that AIUDF candidate Karim Uddin Barbhuiya aka Shaju is capturing booths and rigging polls. Only then he decided to roam around and check what is happening with his people at the polling stations.

“After I reached Dhonehori polling station, I asked the people there about the voting process. I was told they are done with 90% and only the ones with tokens will access the booth as it was already 5:00 pm. That is when I saw CRPF jawans escorting two individuals out of the polling stations. I asked them why they were doing so and I was told, because they don’t have the tokens issued,” informed Laskar.

He added, “As I was talking to them an individual identified as Shabir Ahmed Laskar tried to catch hold of me. A clarion call followed next and the mob started gathering thick and fast. They were pelting stones at me and the security personnel rushed me inside the polling station to protect me. The stone pelting continued as we were waiting inside. Within few moments, people started climbing on top of the school’s roof and were trying to set the school on fire. They attempted to burn me alive and that is when security personnel opened fire.”

While making this huge claim, Laskar added that it was a pre-planned attempt to murder him. “Not only yesterday, there were other similar attempts too. And Karim Uddin Barbhuiya is behind all of it,” said Laskar.

He added that he will appeal to the Election Commission of India to conduct re poll at Sonabarighat High School, Swadhin Bazar and at Dhonehori LP School.

A video surfaced on social media where the locals of Dhonehori area is claiming to have found a revolved alongside Aminul Haque Laskar’s voter id card. “My voter id card is with me and I have no clue where they have found that card,” said Laskar and posed with his card for the camera.

“That gun belongs to Shaju (AIUDF candidate Karim Uddin Barbhuiya) and the police must investigate the matter. How is it possible that the ADGP, DIG, SP could not find the revolver but once we all left the locals found it. The matter will be investigated thoroughly,” asserted Laskar.

He applauded Assam Police for their efforts. “I spoke with ADGP SN Singh, DIG Debojyoti Mukherjee, SP Bhanwar Lal Meena while I was kept hostage. They came to the spot and rescued me and the polling officials unhurt. It is because of their sincere efforts, we are alive,” he concluded.