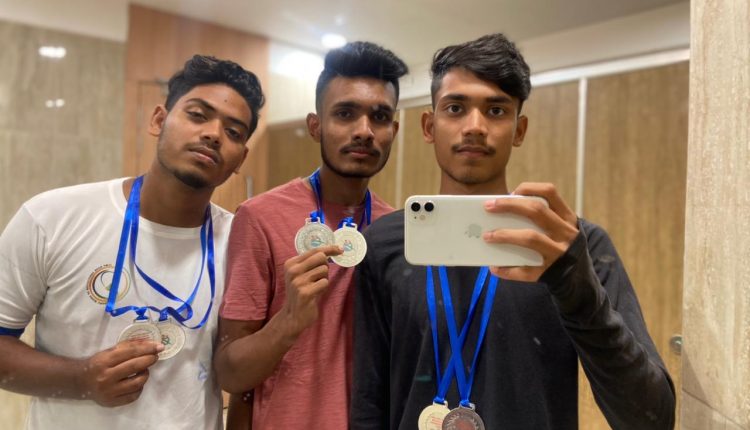 The National Championship for Jump Rope was organized by the Rajasthan Jump Rope Association from 17th-20th September, 2021, in which competitors from around India competed to be one of the bests in India. Assam sent a delegation of 12 participants out of which three namely, Pranabjytoi Biswas, Dhananjoy Das and Joydeep Das hail from Silchar and three of them have begged 2 silvers medals each, making 6 silver medals in total just from Silchar. The defending champions of the Asian Championship also took part in this competition.

It’s a moment of pride and though the sport and the players suffer from lack of publicity but their efforts and training is what makes this success possible. Three of them were students at the Kendriya Vidyalay, NIT, Silchar and live in the nearby areas. Three of them started playing this sport from their School and represented and won at various regional and National level competitions. The sport resembles that of skipping done with a rope. It’s a more intrigued and professional approach to skipping and a lot of techniques and skills are added up to make this sport up. We too at Barak Bulletin very recently learned about such a sport and it’s scale of competition and belive that more resources should be put in for it’s development and awareness.

Due to lack of infrastructure, three of them are mostly self-trained while most of their competitors had coaches behind them. Pranabjyoti Biswas say, “People don’t even know about this sport here, and it’s hard to expect training and infrastructure. We have done our best and the internet helped us widely to develop the skills needed.” He also informed us that two of them owing to their performance got selected for the Asian Championship happening next year and they will be starting their training camp for the same from December,21.

Three of the youngsters have completed their higher-secondary schooling this year and are now pursuing their graduation in different fields. We wish them all the very best and hope their story and their sport reaches more households so that even more kids from the Valley get inspired and bring honor to themselves and their State and Nation.