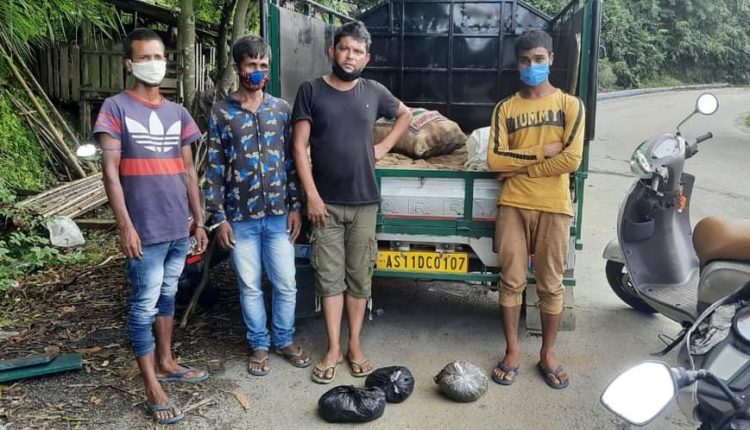 A unit of the Young Mizo Association (YMA) which defines itself as a non-political, Voluntary organization, detained a vehicle allegedly heading towards Aizawl. The cadres of YMA stopped the mini-truck carrying sand plying on Silchar – Aizawl national highway.

V.L. Muana Rokhum, Officer-in-charge, Excise Kolasib informed that all four of them have been sent to custody and will be produced before the magistrate today. “They are residents of Cachar and they were driving a car bearing registration number of Assam. We have tested them for Covid 19 and after they tested negative they have been sent to the custody,” informed OC Excise – Kolashib.

He said, “At around 1:40 pm, the YMA detained the Tata Ace vehicle in Kolasib town carrying I.5 CM sand. When searched, 1.8 kilograms of cannabis (ganja) was found in the truck. The YMA committee called and informed me about the detention and then I went to the spot and ascertained the facts.”

Truck driver Rafique Uddin along with Sahid Laskar, Babul Hussain and Rahul Alom are now in Mizoram’s custody. An NGO carrying out an operation and detaining Cachar residents has shocked the drivers and owners in the Lailapur and Dholai area of Cachar.

“What if they are being framed? Should NGOs or social organisations start carrying search operations in Cachar? It is our request to the Assam government to intervene immediately. Police can search vehicles but NGOs don’t have that right. Also, why would someone smuggle only 1.8 kilograms of Ganja? In Cachar and the entire Assam, hundreds of kilograms have been seized so far, we haven’t seen a case where the smugglers were smuggling such small quantities. This needs an independent inquiry and intervention from Cachar Police,” said a member of the Lailapur Truck Owners’ Association.

Moreover, this comes as a “tit for tat” from Mizoram. Last Saturday, Cachar Police arrested four miscreants while selling illicit liquor within the constitutional boundaries of Assam. That time, SP Kolasib said that all four of them “were innocent villagers” who travelled across to meet their friends and “fetch some stuff”.

The tension between the two states persists albeit in a different form. A few days back, armed Mizo civilians stopped an ongoing construction of a road commissioned by the government of Assam in Khulicherra. Later, the Mizos constructed camps and took control of the area. According to them, the area is under the jurisdiction of Mizoram. A contingent Assam Police led by SP Cachar visited the spot to continue the work in progress but they returned as the Mizo armed forces took their position on the hilltop waiting to launch an armed blitzkrieg as they did on July 26, 2021.

Police sources informed that drone footage revealed Mizos have set up a “number of unauthorised camps” within the territory of Assam. SP Cachar had informed that the matter is being discussed at the “top-level”. As discussed and Mizo-aggression continues, will the general public now become a part of the “tit for tat”?