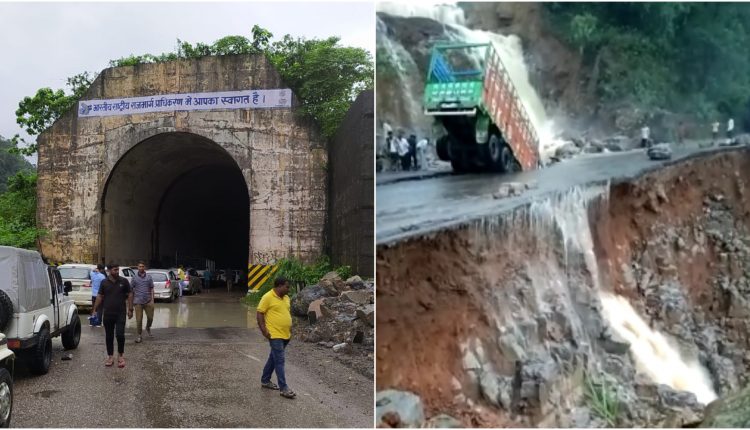 The people of Barak are moving relentlessly with their lives in their hands. Although there are many thoughts in the mind, there is nowhere to vent. The two of us were going to Guwahati, I had an appointment with a doctor and one of my relatives was travelling for some office work. For the past few days, storms and rainstorms had been raging all over the Northeast. On Wednesday morning, June 15, I sat on a hatchback and left for Guwahati along National Highway 06.

In the morning, through East Jaintia Hills police sources, we came to know that a small landslide had hit Sonapur; they said it may take a few hours to clean the road. I thought we might have to wait a little longer for the road to open. Even though I ate a full meal from home, I actually crossed Digarkhal and ate something light at Maa Kali Hotel and Restaurant. I also bought drinking water, biscuits and some chocolates, just in case, if I got stuck on the road for a while. The condition of the road was very bad, the drains on the side of the road built a few days ago were not working, the water flowing down the hill was flowing over the road in some places.

Soon, the stream of water washed away the structures, the stones of the road; Gargantuan holes had been created. Small landslides had occurred in places; Arrangements were being made for movement with JCB. After crossing a few landslides, I proceeded to the Sonapur Durga Temple at 3:30 in the afternoon, bowing to Maa in devotion. But before we could get close to the tunnel, we saw a long line of cars, and the river Lova was raging ahead.

Assessing the situation, I got out of the car and ventured towards the tunnel. A person from Meghalaya administration came to our driver with a small packet of Sabisco biscuits and a bottle of water. The items were small, but the sentiment was grand for us. I was trying to observe the natural beauty of the region, as the rain had subsided. I got to meet many acquaintances from Silchar and we spoke of the unfinished highways what is now popular as Mahasadak.

It began to rain again, and after evening the light of hope had appeared; All the cars had started moving. “There is no traffic police here, so there is no question of obeying the traffic laws,” the driver said. However, in the rain, some Khasi boys were trying to manage the vehicles (they were probably part of a village protection group). It took us about an hour to cross the place, it was very dangerous, the road became very small due to the landslide, water was also flowing over the road.

We moved on with gratitude, ‘Thank god, the real danger is over’. But the question of speeding did not arise, we had to go very slowly because water was flowing everywhere on the road. The night was getting darker and darker; I only had water, biscuits, chocolates on the way to the end.

We had to stop again, this time innumerable cars were standing again in a secluded place. I got out of the car, maintaining some distance, the window did not open – it was an outburst of clouds from the sky. After a lot of hard work, I came to know the name of the place is Thangsang (near Longsulung), a dangerous landslide a little ahead and the current. Waited for hours – meanwhile ate and took night medicines. The last ingredient was a packet of Nutri Choice Digestive Biscuit. So I shared and ate, then took the routine medicines.

At 2 o’clock in the morning the wheels started rolling again, but this time the driver himself was frightened by the condition of the road and the flow of water on the streets, the passengers uttered the name of God; This can so easily become the last few moments in this lifetime. In the stream of water, only the upper part of the road towards the ditch was empty. The car could have slipped into the ditch at any time if the wheel skidded an inch in the water which was flowing over the road. In this situation, we somehow managed to cross this dangerous place near the foot of the mountain. All the cars were coming out slowly in the same condition. I understood why this road needed skilled drivers.

Brilliant! We were moving forward again. We crossed the unmanned Longsulungya toll gate – Shunshan toll gate. I assumed that this time we had probably overcome the danger. About five-six kilometers ahead there was a disaster again. All the cars has stopped. It was about three in the morning. It had been raining profusely, I had traveled to Meghalaya several times before in the rainy season, but I have never seen such rain in my life. I had only read in the newspapers about the cloudburst in Uttarakhand. Slowly getting up in the morning, we sat in the car next to the dense forest. One or two people were getting out of the car. The situation of mothers and sisters in such a helpless situation! Only the rage of nature was responsible for the misfortune of the people of Barak!

The Meghalaya administration cleared the landslide at around 8 in the morning, removing the fallen trees and making the road passable again. This time there was no major catastrophe, we had crossed the landslide prone area. We were at Ladrimbai at 10 am. We arrived in Guwahati in the afternoon after about 30 hours of physical and mental stress. The experience of coming to the capital from a district headquarters will remain in my mind forever.