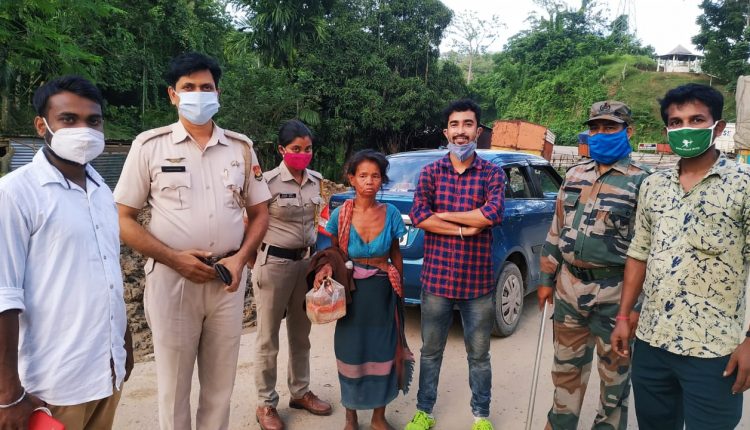 A woman from Tripura who’s suffering from mental instability lost her way while drifting and found her way to Karimganj. The woman named Laboni Chakma is reportedly a resident of the Pechartal village in Tripura and she was found in the Puamara area adjacent to Karimganj town by some locals. Today, after successfully establishing contact with the Pechartal Police station in Tripura, the woman was taken to the Assam-Tripura bordering town of Churaibari where she was handed over to the Pechartal police in Tripura.

It took almost a week to identify Laboni Chakma’s roots and whereabouts as due to her fragile mental state, she couldn’t give them anything other than her name and village’s name. The charity organization Robin Hood Army did a commendable job in spreading the word about her getting lost in a different state with the help of social media. Her photos and videos went viral and after a few days, Tripura police got in touch with them claiming that they know about the woman’s whereabouts and that she belongs from a village under their jurisdiction. After that, she was transported and handed over to the Pechartal police station.

Pechartal police OC Jahangir Hussain said that Laboni Chakma’s son had filed a missing person case a week back. She was on her way to visit her eldest son, and that’s when she lost her way and ended up in Karimganj’s Puamara area. He also thanked the workers of the Robin Hood Army who worked hard for Laboni to get back to her home.

On behalf of the Robin Hood Army, Sujan Deb Roy said, “A week back, a certain person from Puamara in Karimganj called me up claiming that a woman had lost her way and claims to be from Tripura. When I went there, after talking to her for some time, I managed to get her name and where she lives which is a village called Pechartal in Tripura. Her mental condition seemed a bit fragile with vulnerable memory. We tried to spread her details on social media as much as we could. Then a couple of days back, Pechartal Police Station in Churaibari got in touch with me asking me about Laboni Chakma and that they’re ready to take her back to her home. But when we went to Puamara to fetch her, she had again disappeared and left for some other place. Then finally, after we managed to locate her successfully, we today handed her over to the Pechartal Police OC who took over her responsibility.”

Apart from Sujan Deb Roy, on behalf of Robin Hood Army Karimganj, Sanjib Das and Sujit Sinha were also present today. The Police OC Lions Club Frontline took the initiative to manage a vehicle for the safe passage of Laboni Chakma to Churaibari.