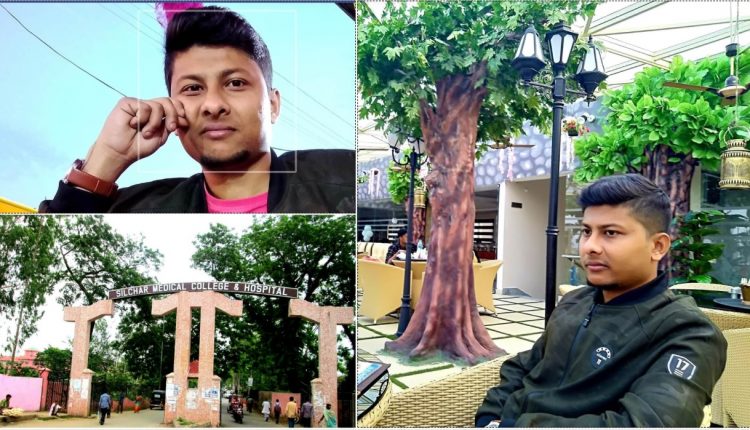 26-year-old Bilpar resident Sayan Das died on July 30/31, 2020. SM Dev Civil hospital and Silchar Medical College and Hospital both said he was brought dead/dead before admission to the respective hospitals. However, the family blamed the healthcare infrastructure and said that Sayan died while doing rounds and rounds seeking treatment.

The fact revealed so far is that Sayan Das was first rushed to SM Dev Civil Hospital on a rickshaw and then to Silchar Medical College and Hospital on an ambulance. His funeral was conducted following the COVID protocols in the presence of Silchar MLA, Dilip Paul, and General Secretary at District Congress Committee, Abhijit Paul. Sayan Das’ brother, Samrat Das tested positive for COVID19 a day after Sayan’s death.

The family members said that the doctors in Silchar Medical College and Hospital informed them that Sayan Das had tested positive for COVID19. They said he was alive when they reached Silchar Medical College and Hospital and the doctors, instead of treating him, made them go “rounds and rounds” for the COVID test. Unfortunately, Barak Bulletin is not in a position to confirm if Sayan Das had at all tested positive or not.

Since the outbreak of the virus and the announcement of subsequent lockdowns, a team designated by the district administration and SMCH briefs the media on COVID related issues every day. This is the team that briefed the media about Jamal Uddin – the first COVID positive patient in Assam, about the first death, about the first discharge about the ruckus in the quarantine centres and everything else that we have read so far on print or web publications. That team did not give any briefing on Sayan Das’ death and whenever the press corp asked a question related to him, they either dodged it with an irrelevant response or left it ignored or unattended. So, this editorial will raise more questions than dishing out answers.

When the news of Sayan Das’ death broke it came in as a shock for many. A contractual worker at Silchar Municipality Board, young and actively involved in socio-cultural activities, Sayan’s death reminded people about Sayantan, about the thousands who die on the way to Guwahati or Shillong because SMCH can’t provide adequate treatment during an emergency. The healthcare infrastructure of Silchar has left a scar in many hollow hearts.

When Barak Bulletin reached out to the superintendent of SM Dev Civil Hospital and asked about Sayan Das, he said, “Sayan Das was brought dead.” The correspondent asked, in that case, why was he sent to Silchar Medical College and Hospital? The superintendent replied, “Civil Hospital does not have the authority to declare death and that is why Sayan Das was referred to SMCH.”

Many lawyers, Police officers, and doctors said the superintendent’s statement is bizarre and stated that SM Dev Civil Hospital or any other hospital for that matter can declare deaths.

The Vice-Principal of Silchar Medical College and Hospital also the authorised spokesperson when it comes to COVID related issues, echoed the Civil Hospital superintendent and confirmed that Sayan Das was brought dead at SMCH and tested positive for COVID19. He was quoted by several publications stating that Sayan Das’ body has been sent for postmortem.

Barak Bulletin spoke with the official spokesperson of SMCH who also confirmed that Sayan Das’ body has been sent for postmortem. “Postmortem is essential as he was brought dead. It takes time to get the postmortem reports,” said the spokesperson on record.

The ‘U’ turn came into light on August 3, 2020. Dr. Prosenjit Ghosh Deputy Superintendent Silchar Medical College during his press briefing said, “1st COVID positive Post Mortem examination was done today by Dr. Gunajit Das, Head of the Department of Forensic Medicine, SMCH.” Along with the media statement, he shared an image of Dr. Gunajit Das.

Now, here comes the first question, if the first postmortem of a COVID positive deceased was performed on August 3 then what happened to Sayan Das who was cremated on July 31? Does that mean that Sayan wasn’t COVID positive at all or does that mean that the postmortem did not happen? When our correspondent reached out Dr. Ghosh asking about Sayan Das’ postmortem, Ghosh replied, “I have confirmed it with Dr. Gunajit Das, Sayan Das’ postmortem was not performed in SMCH.” A complete ‘U’ turn from the authority.

The ‘U’-turn on postmortem was followed by a blanket ignorance. Neither Media Expert, District Health Department – Suman Choudhury nor Dr. Prosenjit Ghosh replied to any question on Sayan Das. Choudhury made it clear that Dr. Ghosh is the competent authority to respond to this query and Dr. Ghosh refused to respond. It is worth mentioning here that Dr. Ghosh started filling in for Dr. Bhaskar Gupta in his press briefing duties from August 1 onwards, a day after Sayan Das died.

So, what was the exception in the case of Sayan Das? Was he really dead before admission to SMCH? Did the superintendent of SM Dev Civil Hospital and the vice principal of SMCH lie and misguide the media by concealing and distorting facts when they both asserted that Sayan Das was brought dead going against the family members’ claim?

Concealing facts does not end here. A question was asked to Dr. Ghosh in the official WhatsApp group used by the administration to brief the media. This is the same group used to disseminate all official information related to COVID19. The questions read, “Sir, Sayan Das’ cremation was conducted following the COVID protocols on July 31, 2020. Today is August 4. Did he test COVID positive? If yes, as you have done in the past, please inform if the cause of death COVID or non-COVID?”

Dr. Ghosh ignored the series of questions related to Sayan Das and kept sharing information about everything else. The only reply he gave read, “The medical cause of death will be available in the death certificate.”

So, the rules are different for Sayan Das? Because so far, the administration has informed the press about every death and never asked to check it on a death certificate. For example, in the case of Janiganj Resident, 70-year-old, Narayan Mitra who died after testing positive for COVID19, the press was officially informed that he died due to Myasthenia gravis and not COVID, which was reported by the press. Why is the same not being done for Sayan Das?

For the benefit of the readers, whenever deceased tests positive for COVID19 posthumous or while alive, the reports are sent to the death audit board which then decides if it was a COVID death or not by identifying the primary cause of death. So the bigger question here is, have they at all sent the reports to the death audit board? The question arises as Dr. Prosenjit Ghosh updated about deaths that took place after Sayan Das’ death and clarified which is a COVID death and which is not.

Yesterday, in his media brief, Suman Choudhury informed that two individuals died in Cachar with coronavirus infection in their body but the death audit board will declare if those are COVID death or not. No such statement was ever released for Sayan Das, so, was he COVID positive at all? And if not why did they cremate him following the COVID protocols?

Sayan’s family alleged that the 26-year-old was alive when they reached SMCH but the doctors refused to treat the critical patient unless they furnished a COVID test report. The process of the COVID test was so lengthy that they lost almost two hours doing “rounds and rounds.” The same allegation has been made by 21-year-old Mustak’s sister, 70-year-old’s niece, and several others.

Doctors in SMCH do not touch critical patients before COVID test is performed, is that what the authority tried to conceal by claiming Sayan Das was brought dead. Or did they try to hide lackluster attitude? Is this a cover-up that the SMCH officials failed to execute? Sayan Das is no more with us, but the unanswered questions still haunt as they must.