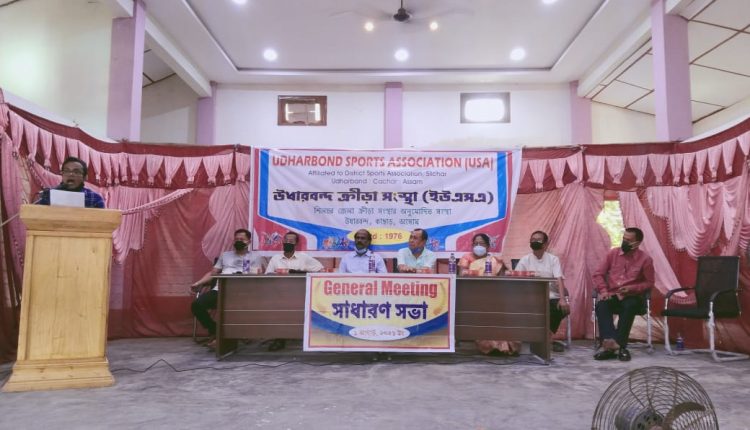 In a rare instance in the history of the Udharbond sporting fraternity, more than 40 representatives of clubs have come forward to attend the committee’s meeting. Sportspersons from Shalganga, Kumbhirgram, Kumbha, Patimara, Thaligram, Nagar, Madhura, Dayapur, Majhargram, Gossaipur and Rongpur, including the Udharbond area, the total number is 220, have all gathered. As a result, they have also spontaneously joined the process of forming the new committee of the Udharbond Sports Association (USA). This only goes to prove that those who have been holding the position of USA for so long have not done any substantial work in the past few years. Sports activities in the Udharbond area have become inactive because of their inefficiency. As a clear answer to this, sports enthusiasts, organizers and former and current players have witnessed the formation of the new committee.

The new USA committee was unanimously formed in the Udharbond block auditorium. But more important is the fact that this is the first time so many club organizations have come together on a single platform to express themselves. The USA was formed in the 70s with this goal in mind only. Several issues came up in today’s meeting, which was kept under the rugs for so long.

First, the USA is not a club, it is an organization. But those who have been holding the official positions of the USA for so long have promoted it as a club. An organization was turned into a club to protect its own vested interests. But everything is clearly mentioned in the constitution of the USA. But unfortunately, no one has inquired about this so far. The sports lovers of Udharbond simply cannot avoid this responsibility, and they should have raised their voices earlier. However, now that they have raised their voices, they cannot be accused of complacency now. But the funny thing is, those who are holding on to the positions in the USA are now raising this question. In their words, where have those been all this while who are asking the question now?

Everything has its limit. This is how protest and dissent break out when the barrier of patience gets broken. There are many such examples not only in sports but also in other societal issues. The same thing has happened with the USA now. The failure of the incompetent committee members has broken the patience of the local sportspersons. Despite being an approved body of the Silchar District Sports Association (DSA), the USA committee could not do anything for the development of sports. So the sports fraternity has become vocal to get everything back on track.

Significantly, another mystery unfolded on the day the new committee was formed in the USA. Representatives of clubs, organizers and sports enthusiasts from Thaligram, Nagar, Madhura, Dayapur, Majhargram, Gosaipur, Shalganga, Kumbhirgram, Kumbha and Patimara all spoke in unison, claiming, “We have never received any invitation from the USA.” This proves how the USA has been run for so long. This is not the end, the Table Tennis Club has a special place in the entire state. However, the former and current secretary of the same club stood on the stage and said, “This is the first time in the 30-year history of the table tennis club that we have been invited to a meeting in the USA.” Not just the TT club, there are many clubs that have never been invited by the USA. However, a few days ago, the members of the committee held a meeting and claimed 100% success on average. And how true their claim was got proved in the block auditorium.

In fact, the meeting of the new committee has given life to the local sports fraternity. The presence of so many sportspersons has brought much-needed oxygen. The new committee has been formed in such a way that club representatives from each region, including Udharbond, are represented now. Founding member Sujit Kumar Deb is the President of this new common platform and Mrinal Bhattacharjee is the Secretary. The Executive Committee has 11 members and a total of 29 members are in the committee. MLA Mihir Kanti Shome is the Chief Patron. The new committee has been formed in the same way as a committee should be in a sports body. Four vice-presidents and joint-secretaries each have been appointed. Cricket, Football, Others, Ground-Stadium, Umpire Media and Communication have one Branch Secretary each. Each Branch Secretary will form his own committee with four or five members. Representatives of rural clubs will also be on this committee.

Sumon Keoch, a sports lover from Kurigram, paid special attention to the formation of the new committee. He has serious injuries to his legs, and there was a lot of anger and frustration in his eyes. The pain of how an association like the USA has been useless for so many years brought him to the block auditorium meeting that day. However, Sumon was not alone in today’s meeting. Many like him endured this pain day after day. That is why they could not resist responding to the call of the formation of the new committee.

Another important issue came up in today’s meeting. That is how one field after another of Udharbond has been lost due to a lack of sporting activities day after day. Maybe someone is forcibly occupying the fields. Or, the fields might have been taken over by the anti-socials. But these fields happen to be the supply line to build a player. Many players of this region have grown up playing in these small fields. But today those fields are not available. These issues, however, have unmasked the so-called incumbents of the USA.

But there are still many challenges waiting ahead of the new USA committee. Now every sportsperson has his eye set on this common platform, as their work has just begun. The path waiting for them is difficult. But the way it has been initiated, hopefully, everything will be fine in due time. The biggest thing is that the USA is revived now, which has been in the ICU for so long.