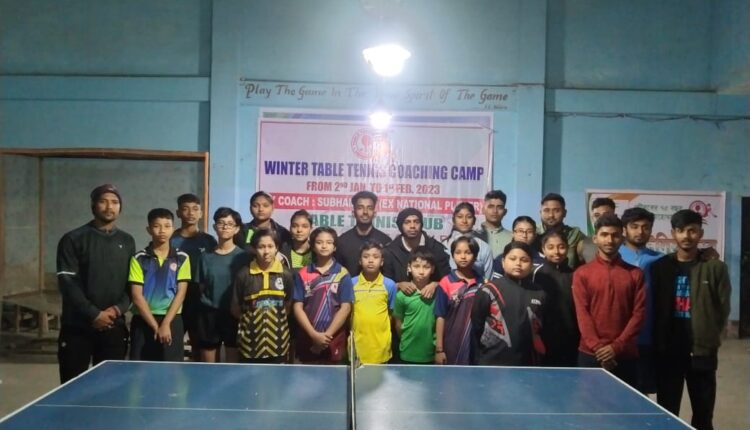 Table Tennis Club of Udharbond has made a special place in the table tennis arena of Barak Valley as well as the entire state. Talented paddlers are emerging from here and representing not only at the district and state level but also at the national level by playing in national ranking tournaments. Now another feather is going to be added to the crown of Udharband TT Club. For the first time in the history of Barak Valley, Udharbond TT Club is going to organise Table Tennis Premier League. The event will start from 24-25 January in the club building.

In fact, a special camp has been going on since January 2 at TT Club. This one month long camp has been named High Performance Camp. It will continue till February 1. This is also a record because no club or organisation has ever organised such a long coaching camp in the history of table tennis in Baral Valley. Another specialty of this camp is that national coach Subham Das of Siliguri is training the paddlers in this high performance camp. Seven national paddlers are in this camp. Eight players from Udharbond and six from Silchar are also with them. In all, the number of paddlers in the camp is 20.

However, the TT Club is not pleased by conducting this special camp alone. The Table Tennis Premier League is being organised to see how much the club’s children have benefited from the high performance camp. TT Club is moving forward with an eye on how the local players can regularly play in the national ranking matches. The target of TT Club is to improve the skill level of local paddlers by playing with national level coaches and players.

Talking about the camp national coach Shubham Das said, “I have come here for coaching before. I came here for a 15 days coaching camp in 2018. From that experience, I can say that the paddlers of the club have progressed a lot compared to before.” He also said, “The children here will improve their skills by playing with national level players. Earlier the children here were not getting results. Now they are getting. I have high hopes for Dibija Paul. I believe she will have more success at the nationals. But not only her, some others are also very talented. I have high hopes from them too. As a result of such camps, their skill level will improve. Focus will increase. I would like to thank the TT club officials for organising such a camp. But there are some infrastructural problems here. There are some problems regarding the boards, mats and lights.’

Club coach Parthapratim Deb said, “There are three sessions per day in the high performance camp. Basically, we have kept the players from Under 11 to Under 19 in this camp. Alongwith 14 locals, there are a total of six ranking paddlers from Siliguri. We are going to organise the Premier League to see how much our players have benefited from this camp.”

Notably, a total of 28 players will participate in this Premier League. There will be seven teams and each team will have four paddlers. Apart from the twenty players from the high performance camp, national coach Shubham and other club coaches will also participate in it. Teams will be formed through draw. The premier league will be franchise based. Seven sponsors have come forward for it. Players will be given jerseys and lunch by the sponsors. Not only this, the paddlers participating in this premier league will get match fee also.

Straight away, this paddler manufacturing ‘factory’ of Udharbond is going to set new benchmarks.