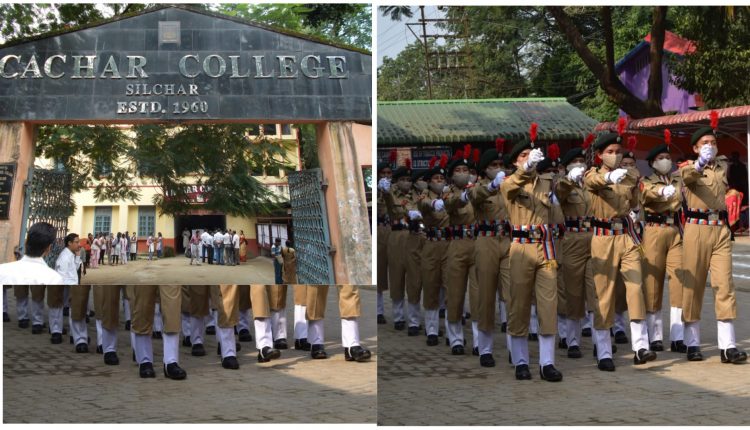 Uniform at Stake? How Cachar College Principal is on the verge of destroying its NCC Unit

Prime Minister of India, Narendra Modi stands tall today as an ambassador of the National Cadet Corps (NCC). On several occasions, he has nudged the country’s youth to join the NCC. “I am proud that I have once been an active cadet of NCC like you,” the Prime Minister said earlier this year while addressing the cadets at NCC Rally in Cariappa Ground. Chief Minister of Assam Dr. Himanta Biswa Sarma also holds high regard for the NCC. Recently he announced that the State will bestow its trust on the NCC cadets to do a door-to-door drive and verify the names enrolled in Orunodoi. Additionally, there is room for advantage for the NCC Cadets in Agniveer and all other defence recruitment programmes run by the Government of India.

In such a scenario, when the Cadets from the Unit of Cachar College went to practice and prepare for the upcoming Independence Day Parade, the security guards at the College Campus prohibited them. The security guards, according to the cadets, said, there are orders from the Principal that there shall be no NCC activities on the College premises.

For the freshers, the NCC Unit of Cachar College is one of the most prestigious ones in Barak Valley. In the list of top 25 Cadets, around 15 cut through from the Cachar College Unit every year. While the Principal Dr. Siddhartha Sankar Nath should be proud of the accomplishments of his College, why is he prohibiting NCC activities when the country is promoting the same?

A deep dive into the College’s boardroom reveals that the institution is on the verge of losing its prestigious unit. Cachar College’s NCC Unit is under the 3 Assam NCC Battalion. Each Unit has a Care Taking Officer (CTO) who undergoes thorough training. After completing a tenure of two years, the CTO becomes eligible to appear for the selection of Associate NCC Officer (ANO). It is a matter of shame that an NCC Unit of Cachar’s College’s reputation does not have an ANO already. The fact is, eligible CTOs need to undergo rigorous training to qualify as ANO. In the past, the CTOs cited various excuses to escape the training.

However, the current CTO, Assistant Professor, Department of English, Cachar College, Hemanta Bora has submitted his willingness to attend the training. He was selected following a process that included interviews in Guwahati. But the Principal of the college, Professor Nath, denied permission to Hemanta Bora.

Principal Nath, in his response to the Commanding Officer, wrote, “The matter was placed in the meeting of the Governing Body, Cachar College held on 30.05.2022 where it was resolved that Sri Hemanta Kr. Bora, Asstt. Prof. Deptt. of English & CTO of NCC Cachar College Unit can’t be approved duty leave for the period 13.08.2022 to 26.10.2022 in connection with NCC PRCN Course to be held at OTA, Nagpur, Maharashtra, India because as per UGC guidelines duty leave may be allowed maximum for 30 days only. Hence, Sri Hemanta Kr. Bora cannot be released from attending the training programme to be held from 13.08.2022 to 26.10.2022.” Barak Bulletin has access to the letter and it was drafted on June 13, 2022.

The Commanding Officer, Colonel Vikas Katoch had written to the Principal/Director of Guru Charan College, National Institute of Technology Silchar, Cachar College and Haflong Government College on April 18 listing the names of the NCC CTOs of the respective institutions. “It is pertinent to mention here that, if the CTOs failed to attend the course, the institutions will solely be held responsible for any further action pertaining to placing the institution under suspended animation or withdrawal of NCC from the institution.” The most important part of the Letter is, “The documents, (Willingness Certificate and NOC to be issued by Principal) should reach this unit (3 Assam Bn NCC) on or before April 26.” (Please note that the Principal informed about the decision on June 13 vehemently ignoring the deadline).

On July 12, 2022, Colonel Katoch responded to the Principal and that proves that the Principal either has a vested interest against the NCC Unit or Professor Bora. Commanding Officer writes, “For the very same PRCN Course (Scheduled for the same dates and duration) CTOs of Guru Charan College and that of NIT, Silchar has been detailed by their respective institutions. Then why has your institution not taken a favourable stance on the same? UGC guidelines are being followed by hundreds of colleges across India and there are hundreds of ANO currently serving the NC. How were they permitted while your college denied permission to Shri Hemanta Kr Bora.”

The letter adds, “The CTO of your institution (Cachar College) was trained by this NCC unit for “Two years” and he also underwent the selection for “ANO Selection board” including an interview at Guwahati. Knowing very well that the next step would be attending PRCN, however, your institution has not once declined for any process. There have been expenses incurred towards not only training your CTO but also for his TA/DA and other miscellaneous expenditures.” Also, what a Department – Dean of NIT can sign off, why does the Cachar College even need to take it to the Board Meeting and Governing Council?

The Commanding Officer had written to the Principal urging him to respond on or before July 22. If sources in the 3 Assam Bn. NCC are to be believed, the Principal has not responded to date, instead, he has prohibited the legitimate activities of the flourishing NCC Unit. July 12 was not the first time the CO wrote to the Principal, he did so on May 20 as well stating, “It is intimated that over one month has elapsed and so far we have not received the “Willingness Certificate” and “No Objection Certificate” for detailment of your CTO on the PRCN course scheduled in Aug 2022. It is further intimated that, If the CTOs failed to attend the course, the institutions will solely be held responsible for any further action pertaining to placing of the institution under suspended animation or withdrawal of NCC from the institution.”

The leader of the NCC Unit of Cachar College, Senior Under Officer, Abhay Singh confirmed that their routine weekend classes that are attended by around 50 pupils have been suspended after the Security Guards prohibited them from conducting the regular NCC activities. Principal of Cachar College, Dr Siddhartha Sankar Nath remained unreachable to the Under Officer, as well as, to our correspondent. The President of the Governing Body, Shashanka Shekhar Dhar said over telephone, he is “Unable to recollect the development related to NCC” and hence, our correspondent must reach out to the Principal of the College. The Pre Commissioning Course for which Professor Hemanta Kumar Bora was detailed, will commence in Nagpur on August 22. Hundreds of Assistant Professors, including the ones from GC College and NIT Silchar, will attend the training to get elevated from Care Taking Officer (CTO) to Associate NCC Officer (ANO).

Cachar College, unless there is some divine intervention, is likely to miss out. The consequences, as stated by Col. Katoch, could be the withdrawal of the unit from the institution. So, the prestige and pride of Cachar College’s NCC Unit are on the verge of a significant collapse. Hemanta Kumar Bora’s hard work to get shortlisted and commitment to go through the rigour of the multi-week programme far away from his native land and family are being dishonoured. When all Government departments are promoting the NCC, the Principal of Cachar College is not even responding to the Commanding Officer who happens to be a Colonel. All this as the country is preparing to awaken the spirit of nationhood by celebrating the 76th Independence Day with unprecedented nationwide campaigns.