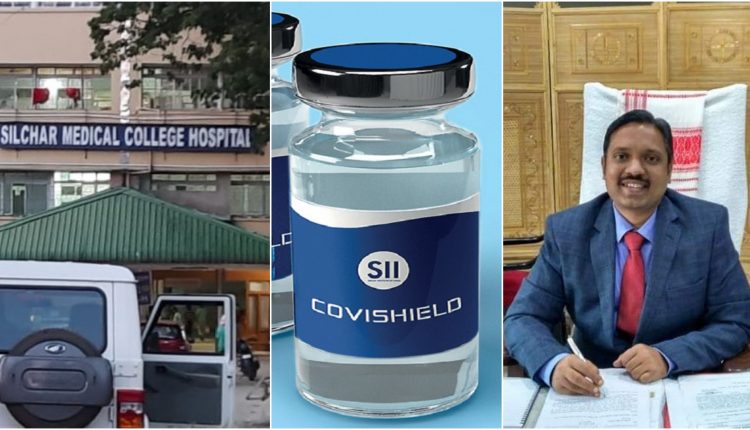 Vaccine doses wasted in Silchar: "Why were 1000 doses stored when only 100 are required?" NHM Assam Director

The process has begun in Assam too and more than 5,500 people have got the 0.5 ml dose. They will again take a jab after 28 days. However, the process has derailed in Cachar district where there are two vaccine sessions operational at this stage – one at SM Dev Civil Hospital and another one at Silchar Medical College and Hospital.

Each vial consists of 5 ml of the dose and 10 people receive 0.5 ml doses from one vial. As confirmed by the National Health Mission’s Assam Director, Dr. S Lakshmanan, 1000 doses got wasted as they got frozen. “Why were 1000 doses sent when only 100 are required. This is something that I am sure will be enquired,” said Lakshmanan while speaking to Barak Bulletin.

He added, “For now our priority is scientific disposal of the wasted doses. We need to ensure that those doses that got frozen are not administered to anyone.”

Dr. PK Roy who is in-charge of vaccination in Cachar is admitted to a hospital as his dialysis is going on. A senior doctor in the District Health Department who is filling in for Roy confirmed that a show-cause notice has been issued by the competent authority. The doctor said that a requisition was sent by Silchar Medical College and Hospital section and the same was shipped through ILR.

However, as questioned by the director NHM, there were only 98 beneficiaries listed to get the dose yesterday, so why were more than 1000 doses, which is 10 times more than the requirement was sent from Cachar Central Storage located in Silchar Civil Hospital? “SMCH has adequate storage capabilities and that is why, it is possible, that the doses were sent. However, from today, we have decided that we will only send 10 per cent more than the doses required every day,” informed the doctor.

The vials are sent from one location to the other using ILR. ILR is Ice Lined Refrigerator that is used to store all Universal Immunization Program vaccines at the Public Health Centre (PHC) level. The ILRs are used because if the electricity supply fails, then the ice lining maintains the inside temperature of the refrigerator at a safe level for vaccines.

“Whenever the temperature falls or rises beyond the danger level, the vaccinator gets a message on his/her phone. Yesterday, there seems to be a failure in the messaging system as the vaccinator did not get the warning message,” informed the senior doctor at the district health department.

The cold chain handler, of the Silchar Medical College and Hospital, is responsible for keeping a record of the temperature. “Once the consignment leaves the central storage in Silchar Civil Hospital, it becomes the responsibility of the receiving authority to ensure that the doses are kept at a required temperature,” said the doctor. As informed by the Serum Institute, the Covishield needs to be stored at a temperature ranging between 2 – 8 degrees celsius.

11,710 healthcare workers will get the doses in phase one of the vaccinations in Cachar. This wastage won’t come as a roadblock confirms, Deputy Commissioner of Cachar, Keerthi Jalli. “We are prepared with enough numbers as error margin was taken into account during preparation,” said DC Jalli.

About the wastage, she added, “It is an unfortunate incident due to lapses in the storage facility and cold storage management at supply-side and at receiving side. We have initiated an inquiry.”

Despite this wastage, the vaccination drive will continue in Cachar today. Today, 64 beneficiaries are listed to get the doses at Silchar Civil Hospital while 97 are supposed to get it in SMCH.