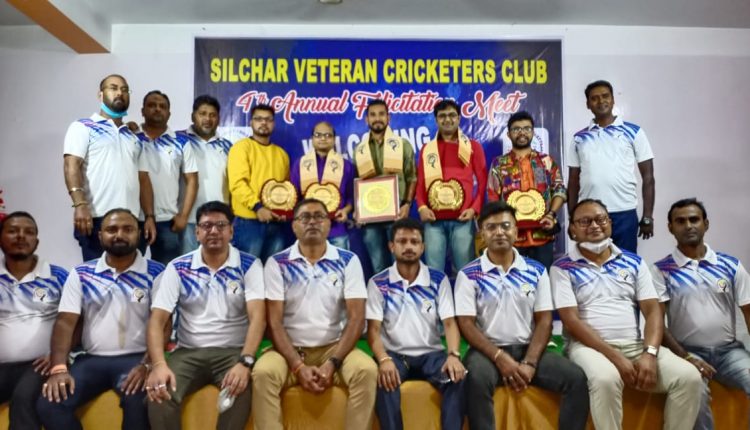 Maintaining all covid protocols Silchar Veteran Cricketer’s Club felicitated the best cricketers of the year. The function was arranged in Hotel Kalpataru, a low key affair this time. ‘Life Achievement Award’ was awarded to five sports journalists for their contribution.

In the opening speech Bijendra Prashad Singh said, “This is the fourth time we are arranging this function. Like the function arranged since the last three years, this year also we will reward the cricketers of the year. We will reward five sports journalists as well. We are receiving help from people since beginning. I, as the President of this club, thank everyone present here for helping us.” He informed,” I am thinking of arranging a camp for pace bowlers as soon as possible. Like every year, this year also, we will arrange Barak Premier League.”

President of DSA, Silchar, also the invited guest, Babul Hore said, “Veteran Club has been doing good for people since it’s inception at different levels. The club has come a long way in four years.”

Another guest and social worker Swarnali Choudhury said,”Besides sport activities, the club is also involved in different kinds of socio cultural activities. They are rewarding the cricketers of the year. I am very happy on being invited to this event.”

In the beginning, they felicitated fourteen players of Veteran Club’s Cricket team with t-shirts for playing 3rd division cricket the previous season.

Best Men Cricketer of the Year award was won by Raju Das. Other dignitaries Chandan Sharma, Partha Pratim Ghosh and Debojit Purkayastha were the dignitaries present at the occasion.