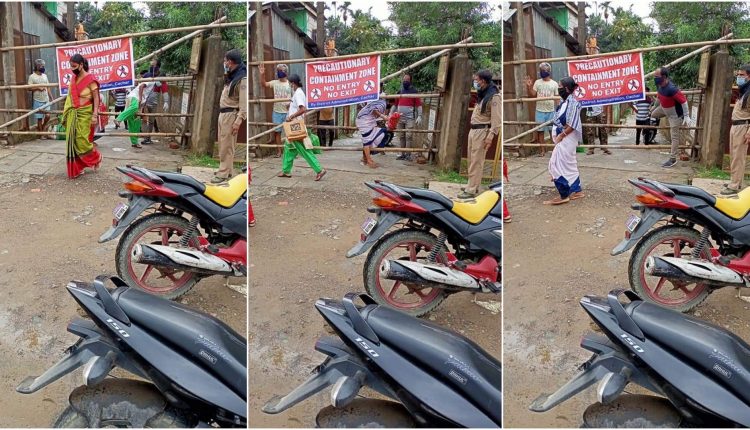 Viral image of people walking in and out of containment zone in Tarapur; "Blown out of context," SP Cachar

Today morning, a few images of people walking in and out of Sukanto Lane a containment zone in Tarapur went viral on social media. In the images, it is seen that few individuals, both male and female are crossing the barricade to enter the lane while a police officer watches as a spectator. The image got widely shared on social media with claims that it is a major lapse from the Police. Few even claimed that the local BJP leader has walked in with her husband.

It is worth mentioning here that considering Archana Nandi, a resident of Sukanto Lane tested COVID19 positve, Cachar District Administration has demarcated the area as a containment zone. As per the Standard Operating Procedure, entry and exit to containment zone are strictly prohibited unless it is an extreme emergency. When asked about the viral images, a senior official in the deputy commissioner’s office said that it the responsibility of the Police to ensure containment zones remain isolated.

Our correspondent reached out to the superintendent of Police Manabendra Dev Ray and he said, “There is no security breach, the images are blown out of context. A local public representative entered and the opposition is now questioning. This is not that big an issue.”

There are multiple images that went viral and each show there are more than one person in an out of the zone. However, few of them were wearing gloves and in uniform, so it is not clear if they were in to do their duty.

The SP assured, “The situation in Cachar is in control.” He added, “So far we knew that the ones testing COVID positive are inward passengers, however, Archana Nandi’s case came as a concern. We do not have a clear indication of how she got affected and when. We are trying to figure that out but the rest is fine.”