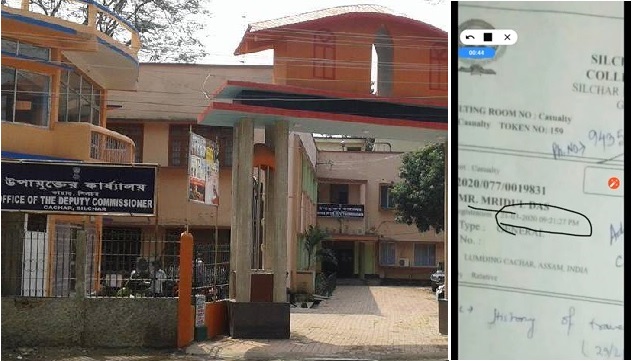 “Scientists say the universe is made up of Protons, Neutrons, and Electrons. They forgot to mention Morons.” The famous quote is what comes to mind after watching a fake video that claims that Covid-19 infection has entered Barak Valley and an individual has been admitted to the ICU of Silchar Medical College and Hospital. But then for such people who stoop down so low just for a few views and little limelight, there is another quote, “Sometimes the first step to forgiveness is realising that the other person is a complete idiot.”

A viral video is doing round in Social media platforms from today morning, claiming that the COVID-19 case has been reported in Silchar Medical College. A woman is being heard in the video to read out some details from the alleged prescription of a patient named Mridul Das. Though the prescription may be true, the said person has been tested negative for COVID-19.

Cachar DC has clarified that the video is fake and as of now, no positive case found in the Cachar district.

Babul Kumar Bezbarua, principal of Silchar Medical College Hospital, said arrangements have been made for examination of coronavirus patients at the hospital and samples are also being sent to Pune if required. He informed that no person has been tested positive at Cachar and in the future if anyone found, details will be immediately shared with media.

The administration has also informed that strict action will be taken against anyone who shares false/fake information related to the current situation.

It is to be questioned here how a confidential medial report has been made public by a section of people, and even disclosing the concerned person’s contact details. It not only brings forward an immature and insensitive behaviour but also proves there are loopholes in the medical team that leaks out these private details.

49 home quarantined, 3 kept in NIT; "No Corona in Cachar yet," District Administration