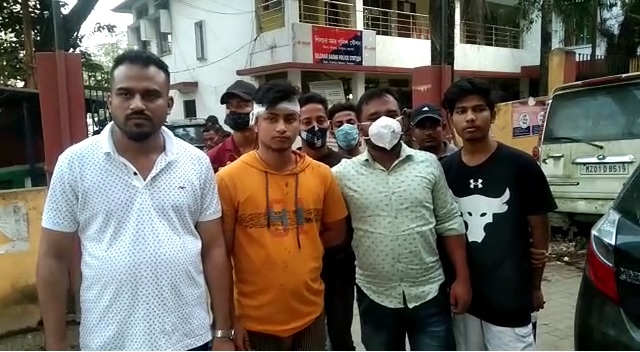 A Cachar College Student, Mehraj Ahmed Barbhuiya went and lodged an FIR today at Silchar Sadar Police Station. He alleged in his complaint that a bunch of miscreants attacked him in front of Guru Charan College.

While talking to the press, Barbhuiya said, “I was passing by the GC College and that is when I stopped to talk to a couple of friends. Before I could start, a few young individuals came and asked my name. After I told them my name they asked me to chant Jai Shree Ram and when I didn’t, they started beating me with sticks. I started bleeding and then they vandalised my scooter.”

He added, “It is a government road and therefore anybody can take that path.” Yesterday, he had published a Facebook post where he mentioned that “Bajrang Dal goons” had beaten him. However, in his FIR, he has not mentioned Bajrang Dal anywhere.

She wrote in her complaint, “I am harassed by a guy name Mehraj Ahmed Barbhuiya a resident of Madhurbond Silchar. He always taunts me and eve-teases me in front of Guru Charan College Silchar. The day before (yesterday) he stopped me with two of his friend and asked me my name and because of not answering his question he caught my hand and used slangs on me and my friend. He also told me that he will make me Muslim.”

Police officials are now investigating two polarising FIRs. Today morning, a boy named Tapash Nath was summoned by Silchar Sadar Police station. “The complaint lodged by the boy is false. He is a Cachar College Student who went there to create a ruckus. Bajrang Dal has nothing to do with it,” said Mithun Paul of Bajrang Dal.

He added, “What we have gathered so far is that the boy was eve-teasing Hindu girls in front of GC College and that is when some locals stopped him. We don’t know who was involved in beating him. However, the FIRs from the girl makes it clear that the boy was indeed eve-teasing.”

The Police said they are investigating the matter and distanced themselves from making any statement at this stage.