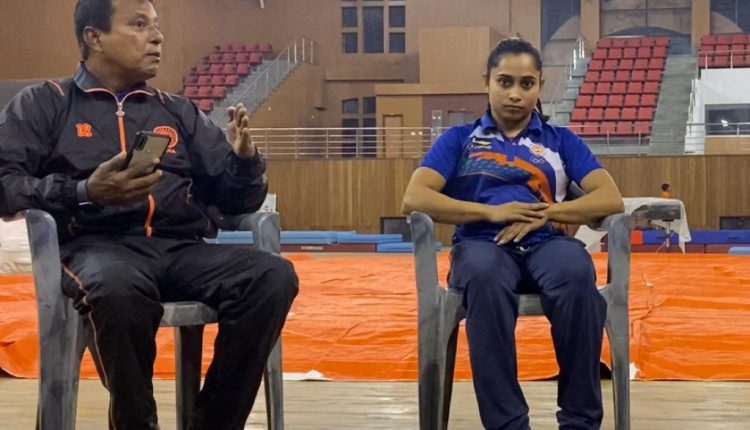 "We are ready for the Olympics, but the pandemic could be a hindrance", says Dipa's Dronacharya coach Bishweshwar Nandi

India’s star gymnast Dipa Karmakar missed out on a medal narrowly at the Rio Olympics last time. The female athlete from Agartala had to be satisfied with the fourth-place finish. But it was still a historic moment for the whole of India. Because this is the first instance that an Indian female gymnast has come so close to winning a medal. Dipa stunned the whole world with her Padunova vault at the Rio Olympics. Dipa and her Dronacharya award-winning coach Bishweshwar Nandi were preparing for the Tokyo Olympics with the regret of missing out on the Rio Olympic medal. Two years back, the star gymnast suffered a leg injury. However, she made a comeback and recovered from the injury quickly. Under the guidance of Guru Visweshwar Nandi, she has been practising at the Agartala NSRC. However, this preparation might get ruined due to the pandemic now.

The International Gymnastics Federation was supposed to organize an international gymnastics championship before the Olympics. But that is not possible now due to Corona. This championship works as the qualifying round for the Tokyo Olympics. In other words, if one performs well in that tournament, he/she will get an Olympic ticket. However, the federation has not been able to organize an Olympic qualifying round due to Corona till now. They might take a final decision on this by June 30. However, discussions are still going on about where and when the championship will take place.

In the midst of all this, Dipa has been preparing for the Olympics for the last one and a half years. Her first and foremost target was to perform well in the Olympic qualifying tournament. But till now, the qualifying championship has not been held due to the pandemic. If the qualifying championship can not be held in the end, the International Gymnastics Federation will give tickets according to the continental quota. This continental quota means that only two gymnasts from Asia will get Olympic clearance. And if that happens, Pranati Naik from India will qualify for the Tokyo Olympics and Dipa Karmakar will get snubbed. The reason behind this is that Pranati represented India in the World Championships two years ago. Dipa was out for injury at that time. As the second female gymnast from the Asian quota, a Sri Lankan will end up qualifying for the main stages of the Tokyo Olympics.

Dipa’s coach Bishweshwar Nandi told Barak Bulletin, “Dipa is ready for the Olympics. But before the Olympics, you have to go down the qualifying championship round. This is where the problem arises. The International Federation has been unable to organize the qualifying championship due to Corona. However, we got to hear that a championship may be organized by June 30. So we are getting ready keeping an eye on that.” Further adding, he said, “Even during Corona time, Dipa is not giving up anything in preparation. She’s still trying. Everything is at standstill due to the pandemic. So every evening at 6:30 pm I take online classes. Dipa and other gymnasts are also taking part in the class. All in all, we are still preparing at full throttle. But now we have nothing to do but wait. Let’s see which way the situation turns in the coming days.”

Another important point is that countries like the US and Australia have banned the entry of Indians to their countries at the moment. This means that Indians cannot go to any country such as Australia at the moment. So, even if the qualifying championship is held, there is still a question mark as to whether the Indians will be allowed to go there. All in all, the Corona pandemic has become the biggest obstacle in Dipa’s Olympic dream.