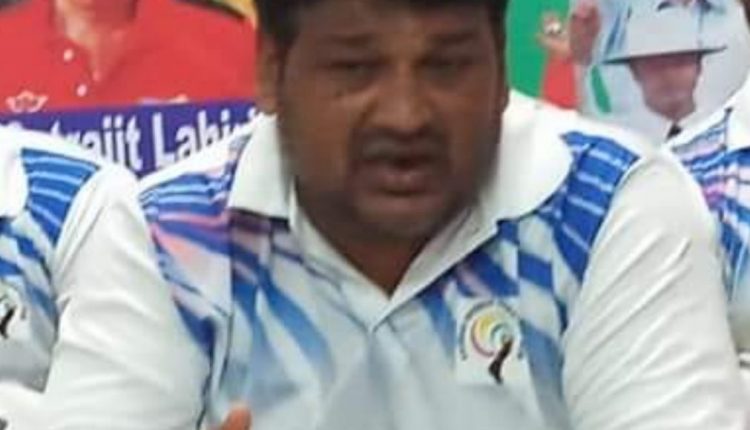 People of Barak Valley have seen Agartala’s Dipa Karmakar making India proud in Olympics, they saw Hima Das run pass her opponents and they even saw Ryan Parag’s Bihu dance in Indian Premier League. The Indian Football team has more representation from the Northeast now than it ever had. Hailing from a stone throw distance away, Mary Kom created history in boxing. All these filled the Valley with the perfume of pride as it did in the rest of the world. However, the thirst to see someone from Barak Valley represent the country is yet to be quenched.

District Sports Association was in the headline recently, no, not for its sports but the annual general meeting. After elections, a new board has been formed and today, the newly elected members took oath. On the sidelines of the oath-taking ceremony, our correspondent spoke with the newly elected general secretary, Bijendra Prasad Singh (Badshah) and asked him about his plans.

Singh believes that the development of infrastructure is very important and that is one of the many plans he has in his mind. “For more than 15 years the Stadium (Satindra Mohan Dev Memorial Stadium) is left half-done. Despite putting a lot of efforts we have failed to complete the construction of the stadium. Due to the unavailability of a full-fledged stadium, we are not getting to host, IPL, ISL or I-league matches in Silchar,” he said.

Adding, “To get people on the field as spectators or aspiring players you need to offer them quality sports which we are unable to do at this stage. Media is far more accessible now. Just tune in to any sports channel and you will get to watch quality cricket or football or hockey being played in different parts of the country and the world. So my and the new committee’s first plan is to complete the construction of the stadium in Silchar.”

He realises that completing the construction of the stadium is going to be a herculean task. He puts in a caveat, “It won’t be easy, we have limited resources and we will need support from the government. I am not assuring that we will be able to do it in this tenure but what I promise is that we will make an effort to do so.”

Talking about sports and talent in Cachar and the valley, Singh said that he has chalked a detailed plan, “When it comes to sports, Cachar DSA organises 13 sporting events which are spread across, Cricket, Football, Badminton, Swimming, Hockey, Volleyball and among other sports. We will need to send our players on exposure tours. For them to play well and prepare for the top-level they need to get exposed to quality talent,” he said.

Singh believes, the mindset is very important and it needs to be shaped. “We too can do it is what they need to believe and only then they will be able to do it. So, that is one of my plans with the talent that we have, send them out on exposure tours and at the same time, organise quality competitions here,” he added.

Sharing his observation on the current scenario Singh said that the kids in the town area are now busy with “WhatsApp, Facebook and their handheld devices.” He finds their interest in sports is declining thick and fast and the ones who are interested in sports from the town area only want to play Cricket, Badminton or Table Tennis. “We need to go to the villages to scout talent and I believe we will get good talent playing Kabaddi, Athletics and all in the outskirts. My plan is to conduct talent hunt programmes through which we can scout talent and then set up training camps to promote them. It is a lengthy process and you won’t get to see immediate results but that is a must needed step in the right direction which will ensure a better tomorrow.”

Singh defeated Atanu Bhattacharjee in the recently held DSA elections. In the same elections, Babul Hore was elected as the president of DSA Cachar.

Meet Silchar's Suprotik Roy who paid tribute to Netaji with 126 sketches: "It's a…