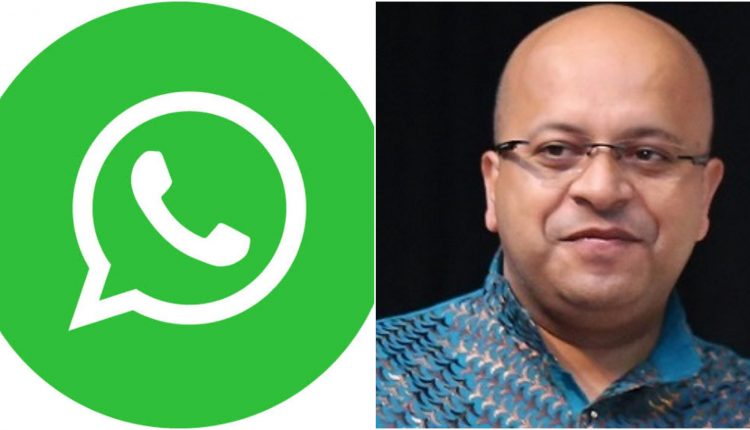 The last weekend was spent answering many queries from residents of Barak Valley as also other parts of the country on the notification by Whatsapp of changes in its terms of service and privacy policy and the need to accept them to continue the services after February 8, 2021. Earlier this month, most of the 40 crore users of Facebook owned messaging platform WhatsApp in India received a message mentioning that ‘Whatsapp is updating its terms and privacy policy’. The proposed changes meant that Whatsapp would share information about its users with its parent Facebook and its group companies and also with third party companies as and when they came into context. The new terms also informed that Whatsapp would share transaction data, mobile device information, IP addresses and other data on how users interact with businesses on WhatsApp and with Facebook for analytics. Even if someone deleted the app from their device, the information would still remain with Whatsapp and Facebook.

This shocked many of the Whatsapp users in the Valley as it is the most widely used messaging platform in the region as also the country. The Barak Valley region which was backward in communications for decades now has become a big user of online messaging technology. The proposed changes along with the deadline approach for a ‘yes’ or ‘no’ and ‘no’ option for opting out were seen as a breach of trust as over the years people had become comfortable across generations in sending voice, video and texts seamlessly to individuals and groups via the platform.

The notification has been unsettling for users and policy experts who see this as an attempt by the social media giant to abuse its pole position in the market. Spokesperson from WhatsApp have maintained that the new policy only targets business interactions, transactions and business related features which will support third party service providers with better analytics. This also means that WhatsApp partners can integrate across Facebook and its other products and platforms. The spokesperson has clarified that it would not be compulsory for the user to share his data as he would be told at the beginning of the chat if the business had decided to use Facebook to store their data and the user would have the option to block the contact. This though is definitely a far bigger issue than what WhatsApp would want to convey. As many would recall, in the US, Facebook is facing multiple antitrust suits because it has been using its financial muscle to buy out competitors like Instagram in 2012 and WhatsApp in 2014. Lawmakers are looking at the courts to mandate that the social media behemoth be broken up by separating WhatsApp and Instagram. This is the nightmarish scenario that was responsible for the initial Congressional investigation.

Facebook has been lax in its data protection regime in the past with organisations like Cambridge Analytica accessing and profiling the user data for targeted disinformation campaign during the 2016 US elections and Brexit. WhatsApp allows one on one communication as well as group chats. The app has 40 crore users who have been given a ‘my way or the highway’ choice by the messaging platform with no option to opt out of sharing their data. Given the nature of private and sensitive data which would include location and UPI transactions, this is not a choice most would like to make. Ever since Facebook’s acquisition of WhatsApp, one had the option to opt out of sharing activity data on WhatsApp from Facebook. Now that option will no longer be available. As a matter of fact, if you are communicating with someone who has the latest version of WhatsApp and you haven’t updated the app, their messages will no longer be visible. This goes completely against the 2018 clarification issued by the group.

What all this boils down to is that WhatsApp is using its dominant position in the market to push through policy guidelines that will affect millions of consumers whose data might get shared across platforms and profiled and dissected in a million ways. This is the classic definition of unfair trade practice as the user has not been left with any alternate options. Clearly the Indian Government has to step in and take up the issue with Facebook as it has done in the past on many issues surrounding Whatsapp. The changes to the terms and the way it is being pushed as a deadlined yes or no is definitely exploitative and a matter of monopolistic and restrictive trade practices which has to be brought to the Competition Commission of India’s notice. This is essential as most users will not realise the nature of the intrusion and unmindfully accept the new terms. At the same time the Government should ensure that the Personal Data Protection Bill is passed by Parliament in the next session itself.

Meanwhile there is a mad rush among the netizens of the Valley to join Signal and Telegram, two of the emerging platforms for messaging with similar encryption levels but claiming not to store or share consumer data.