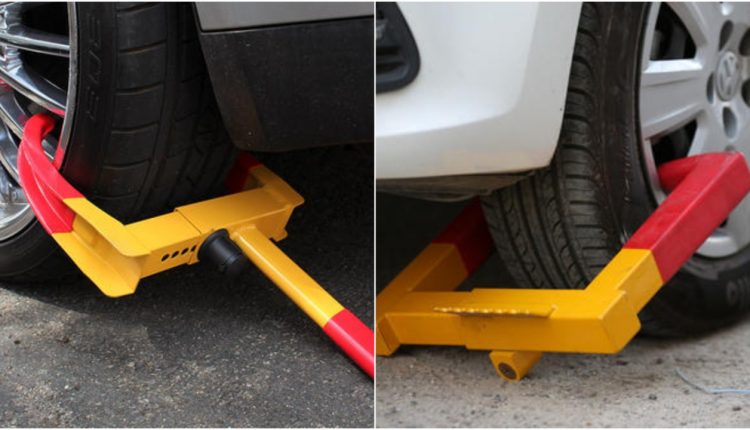 Traffic congestion and parking dilemma have always been one of the recurrent issues faced by the commuters of Silchar on a daily basis. Lack of sufficient road width and poor city planning has led to an enormous headache for the daily commuters of the city who often face traffic jams in different parts of the city. Apart from open garbage disposals, often inconvenient parking on roadsides leads to unnecessary traffic jams, thereby wasting everybody’s valuable time.

Now, to combat illegal parking and violation of parking rules at public spaces, the Cachar police has decided to induct wheel-clamping devices for parking violators of the city. A wheel clamp is a device that is designed to prevent motor vehicles from being moved. In its most common form, it consists of a clamp that surrounds a vehicle wheel, designed to prevent the removal of both itself and the wheel. By using this tool, the traffic police can detain the concerned violater for penalising and prevent him from fleeing the scene.

According to Additional SP of Cachar, Partha Pratim Saikia, orders have already been placed for a bulk order of wheel clamps, of which the first batch has already arrived. “We have placed an order of wheel clamps, of which only the first batch consisting of 35 clamps, has arrived. The rest is yet to reach us. These tools will be used to fight parking violators from fleeing the scene without getting penalised by the traffic police. In the next few days, we’ll be officially unveiling them to the public, and soon these will be seen in action throughout the town”, said the Additional SP of Cachar Police.

The Silchar-Hailakandi road is one of the most important and busiest routes in the entire district, with important institutions like the Silchar Medical College & Hospital (SMCH) and other private nursing homes, NIT Silchar and Assam University, all situated at this route. Last year, in September, the Cachar district administration held a meeting with concerned agencies for the improvement of the Silchar-Hailakandi road and a gamut of issues relating to its cleanliness and hygiene. In that meeting, DC Cachar, Keerthi Jalli observed that owing to haphazard parking and unhygienic conditions, the citizens are facing a lot of hardships in using the road. She also instructed the concerned BDOs of Silchar and Borjalenga as well as the Panchayati Raj officials and representatives of the concerned GPs to identify parking slots and vending zones to minimize traffic congestion in the city.