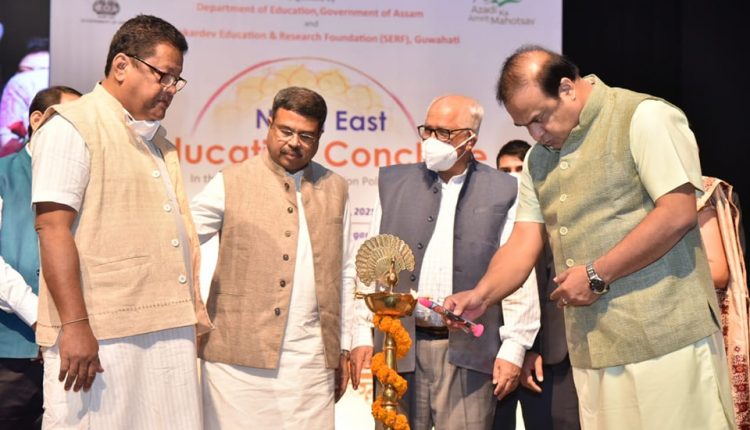 When the intellectuals of Barak Valley called State University an "Agenda to impose Assamese", should we shed a tear at exclusion?

Yesterday, while speaking at the Inaugural Session of North East Education Conclave, the chief minister of Assam, Himanta Biswa Sarma mentioned that five colleges of Assam will be converted into universities by 2022. He said this conversion will help the state government in implementing the National Education Policy 2020.

“We have shortlisted our Autonomous College of Lakhimpur, Nagaon, JB Law College – Jorhat along with Shivsagar College and Handique College will be given the status of University in the next two years of time,” said Sarma. The speech attracted immediate reaction, “Again Barak Valley is not included,” complained hundreds of Netizens. While it is true that be its inclusion in the Tourism Handbook of the state or in infrastructure development programmes, Barak Valley suffers exclusion. But in the case of State University, should the government be blamed for the exclusion?

On September 18, 2019, around 500 students gathered in front of the main gate of Assam University, Silchar. Though it was organised by SFI, many students associated with other students’ organisations had also participated in the demonstration. Together, they demanded a State University in Barak Valley. “We firmly believe that Barak Valley needs another university. Our assessment is that many are getting deprived of higher education due to a lack of opportunities. Also, Assam University Silchar is a Central University and thus there is very little room for reservation. If we get a state university like Cotton or Dibrugarh, the students of the state will get better opportunities,” said Kashyap Choudhury, State President, Students’ Federation of India (Assam State Committee).

“I personally will welcome any proposal for a State University. I believe this will improve the condition of education in Barak Valley and open up more opportunities that will benefit the people. More students are completing their graduation and opting for masters which are creating a scarcity of seats. We see many students flying out in search of higher education. While our first demand is to increase the number of seats in Assam University, I feel a State University will also help the cause,” said  Karanjit Deb who was back then the Silchar City Secretary, Akhil Bharatiya Vidyarthi Parishad (ABVP).

While SFI and ABVP, despite following completely different ideologies, welcomed the demand for a State University, the local intellectuals comprising of professors and social activists wrote page-long editorials condemning the demand made by the students. In 2019, they termed it an “agenda to impose the Assamese Language through an institution.”

“I don’t think we should have a State University in Barak Valley as we already have a Central University. Assam University Silchar has its stature and is funded by the Central Government. All the recruitments are done following national criteria. We can see the condition of the State Universities of Assam.  We were offered a State University in the past too and we rejected that, I don’t see any necessity today either,” Taimur Raja Choudhury, Founder and Editor, Dainik Samayik Prasanga had said in 2019 after the Students demanded one.

Tapodhir Bhattacharjee, former vice-chancellor, Assam University Silchar, a highly respected scholar went on to say, “I don’t think any sensible person will support this unjustified demand.” Sharing his opinion in 2019, Bhattacharjee asserted, “If the Central University here in Silchar can serve the purpose I don’t think by multiplying the number of Universities one can serve the purpose of higher education here. I believe, a State University will weaken Assam University Silchar which has already got much malice. We must first concentrate on how to fight those malices and make it a perfect varsity. I don’t think this movement for State University is justified because you cannot discuss it in a vacuum. The condition of people, the number of colleges already there, to serve as buffers and many other such things must be taken into consideration. At this juncture of time, when the people of Barak Valley are being subjugated in the name of NRC, and this is another strategy of the rulers to divide the people unnecessarily.”

The intelligentsia, minus the political class remained united in its opposition to the very idea of a State University. Teachers and Professors publically called it subtle attempt to impose a language. How will in a classroom of a University, a teacher teaching Economics impose the Assamese language is a question that puzzled many, but hardly anyone matched the editorial criticism to ask it. Pages of daily broadsheets published from Barak Valley, carried one after another editorial belittling the demand. SFI called off its programme to continue the demonstration. That happened when Dilip Paul former BJP leader and MLA of Silchar, Sushmita Dev, former Congress leader and an MP, Dulal Mitra, General Secretary, CPI(M) and Lawyer, much like ABVP and SFI, placed arguments in favour of the State University.

Just two years to the day, when Himanta Biswa Sarma proposed five Colleges and excluded the likes of GC College or any other in Barak Valley, should we shed a tear? Should we write editorials blaming the government?